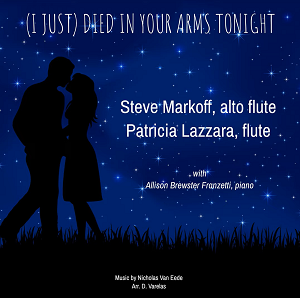 Many popular music fans of a certain age will think of Jethro Tull when they think of flute in a song. It’s a statement that probably dates me, but I don’t care. Steve Markoff and Patricia Lazzara’s flute driven duet “(I Just) Died in Your Arms Tonight” doesn’t recall the rustic charms of Tull but, instead, looks back to Cutting Crew’s out of nowhere 1986 hit as a reference point. Their take on the synthesizer and keyboard glossy pop gem replaces it’s Me Decade sheen with an atmospheric and subtle texture nonetheless echoing the original composition.

It has a beguiling sound. The instruments are wreathed in a warm and inviting sound that the duo balance with a steady hand. No one part outshines another. Markoff and Lazzara are obviously intent on creating and presenting a complete musical front where each instrument complements the next rather than a disjointed hodgepodge of parts rammed together with the hope that it comes out right. The arrangement is airtight and nothing is left to chance.

It does not mean, however, that the track sounds stodgy. There is an airy naturalness in the way that “(I Just) Died in Your Arms” develops for listeners, a vivid sense of the music scooping you up and carrying listeners away. It has a light but definite touch. There is a clear understanding of dynamics, as well, but they are subservient to the song’s engine – its melody.

The melody, of course, keys off the interplay between Markoff’s alto flute and Lazzara’s flute, but Allison Brewster Franzetti’s piano introduces a wild card into the cut. Making her piano contributions such an integral part of the performance is one of the biggest reasons for its success as she deepens the song’s sound. It isn’t quite as reliant on the tandem to carry the day with their flute playing alone

One unexpected byproduct of this performance is how it will force some to re-evaluate Cutting Crew. It is not difficult to imagine a bevy of listening screwing their faces up a little and thinking they never thought the song was all that great; fun, but lacking substance. The fact that Lazzara and Markoff discovered such riches in seemingly throwaway musical junk food testifies, once again, that we should listen to things a little more deeply before dismissing them.

They are building a critical far more than commercial reputation. There is little doubt, however, that covering this pop staple will get them a few more ears than they had before. Lazzara and Markoff’s recordings have immediate appeal once you hear them, it’s all a question of getting them the necessary exposure. They have the gift of poetry in the way they approach the flute. It isn’t just words, meter, and pretty rhymes. Music creates poetry as well and few instruments are as capable of producing its intangible effects like the flute; Patricia Lazzara and Steve Markoff’s playing on “(I Just) Died in Your Arms” possesses a rare lyricism you can’t help but enjoy.

The music of Steve Markoff and Patricia Lazzara has been heard all over the world in partnership with the radio plugging services offered by Musik and Film Radio Promotions Division.  Learn more https://musikandfilm.com