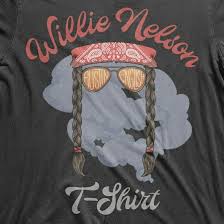 Rising from the darkness like a new day’s sun breaking the horizon, Austin English’s “Willie Nelson T-Shirt” gets rolling with a pulsating, palm-muted strum that immediately lets us know what kind of excitement is waiting around the bend. English starts to sing, and while his vocal is wildly melodic, it isn’t without a little bit of that good ol’ fashioned country grit that is often more than enough to turn even the most citified of folks into a fan of the western beat. “Willie Nelson T-Shirt” follows a simple blueprint – get us shaking, stir up the mood with some larger than life melodies and let the lead singer work his charms through lyricism – but what it yields is anything but ordinary.

There’s no getting around the fact that Austin English’s vocal is the most attractive element to behold in this single, but that doesn’t make the string play any less of a star. Lyrically speaking, “Willie Nelson T-Shirt” is closer to the barebones of a black and white country-pop than it is the brooding western folk that has started to trend among alternative circles in 2020, but the fretwork in front of the percussion is what gives it just enough to sizzle to invite southern audiences into the fold.  There are a lot of different ways to structure a contemporary country song, but I like that this artist is supplementing multiple aesthetics in a stylization inevitably as accessible to the casual listener as it would be the proven Nashville aficionado.

The chorus here sways pretty hard, but as much as I can appreciate what the drums have to impart in this song, the melodic faceting is and always will be the bread and butter of any Austin English track. I only recently got into his work, but having gone back through his discography following my initial exposure to “Willie Nelson T-Shirt,” it’s not difficult for to understand why his sound has been as appealing to the country faithful as it has been in recent times. He’s established himself as a consistent and mostly anti-commercial singer/songwriter in his work without abandoning the mainstream trappings that separate the DFW melody-makers from the Austin types (and I must say, the former could use a lot more players like this one in their camp these days).

I didn’t know much about Austin English before I got turned on to “Willie Nelson T-Shirt,” but now that I know what he’s all about, I definitely plan on keeping tabs on his future output. “Willie Nelson T-Shirt” flirts with some old school elements that aren’t so vintage that you could accuse English or trying to produce a throwback, but if you ask me, his adherence to a classic set of values as a songwriter will eventually be what puts him over the top with mainstream audiences. I’ve been a country music fan for most of my life, and when I listen to this guy, I pick up on a certain “it” factor that you just don’t find every day in this game.