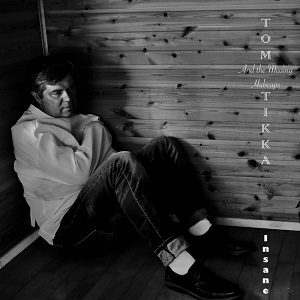 With an alluring but rather mild swing and Thin Lizzy-reminiscent overdrive over the guitar, the beat that starts off Insane in “Good Ol’ Stupid Me” is definitely the kind of scene-stealer that would normally make it impossible for us to focus on anything else, but under Tom Tikka’s command, it’s but one color in a sonic rainbow. Tom Tikka & The Missing Hubcaps aren’t playing games in Insane, their second official studio recording, and while it’s only an EP, this is a record that is almost certain to have your attention the instant you hit the play button thanks to its sturdy, unrelenting rhythms and rhymes. It’s been a great summer for rock, but for something a little edgier but still very pop-friendly both lyrically and musically, this is the band you need to go see right now.

“Good Ol’ Stupid Me” absolutely gets the ball rolling right, but once we get into the guts of the heartland rock-inspired groove tune “Driving Me Insane,” some of the fringe components of this act’s sound begin to make themselves tangible to us. There’s a lot of Americana in the artistic setup Tom Tikka & The Missing Hubcaps are using for Insane, and while it wasn’t present in the three tracks featured on Working Class Voodoo, I think it makes for the perfect addition to their overall. It affords the lyrics a pastoral dimension, especially in something like “Driving Me Insane,” that makes Tikka’s sentiments sound and feel even more organic and humanized than they already would have (which is always a good thing in pop music, no matter the era or the talent in the booth).

“Sweet Sugar” jumps right into the pool of pop prowess without thinking twice, and its reckless beat produces a catharsis in its chorus that is easily my favorite moment of the entire EP. This song isn’t nearly as surreal in compositional style as “Summer Means New Love” is, but this doesn’t mean that we face an aural hiccup as we move from one to the other in the natural flow of the tracklist. In all honesty, everything here has a mixtape-style grain (applied with appropriate pop polish) that makes it easy to listen to on repeat or straight-through as was intended by the band, and that isn’t something I’ve found in a lot of other rock records of a similar length and aesthetical persuasion this year.

Insane comes to a conclusion on the back of the homespun folk-rocker “Dismal Day,” and despite being only one hundred and nine seconds long, it has the most mature and supremely melodic substance of any track here. Tom Tikka & The Missing Hubcaps aren’t reinventing the wheel in this record, but they aren’t claiming to be starting a revolution – they’re getting back to the basics of being a pop/rock band, and from where I sit, it’s a concept that a lot of other groups in their scene should really think about adopting for themselves. I love the pure DNA of Insane, and I think most other pop/rock fans will, too.