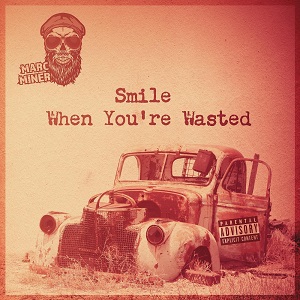 Country is in an interesting state right now, and though a lot of critics will tell you that it’s moving in a more surreal direction than the previous generation of megastars would have allowed for, I think the rise in outlaw throwbacks like Marc Miner proves otherwise. Miner’s debut album Smile When You’re Wasted sees him tracing the roots of country music’s most dangerous league of cowboys all the way back to the beginning only to pepper their original blueprint with a lot of modern elements simply too outrageous for the mainstream to touch on.

Smile When You’re Wasted is soaked in bourbon and rye from beginning to end, inviting strange but evocative combinations of pop and rock into the fold with songs like “Warm Welcome,” “Sweet Codeine” and  “Easy Street” while treading experimental waters in “Strip You Down,” “Last Words” and “Empty Bottle Blues” with relative ease. Make no mistakes about it – this record isn’t all thick clouds of pot smoke and the smell of cheap musk and cigarettes, but instead a workbook of self-awareness on the part of Miner, particularly when we’re least expecting it to be a document of brooding, unrepentant balladry disguised as a bar fight. This singer/songwriter is pushing the limits like few others have lately, and his debut is an undebatable slam dunk because of this very reason.

For an LP with as limited a percussive presence as this one possesses, there’s a great rhythm to the swing we hear in “Warm Welcome,” “Nothing Good Bout the Way I Live,” “Everything but Modest” and the rather hesitant jam “Border Town Bar.” Miner’s vocal is always at the center of all the action, guiding us in and out of the throttling grooves when things are getting sticky but leaving us to the gentle sway of the melody when we need to feel his vulnerability, such as in “Over” or “Easy Street.” He’s never really afraid to be exposed in his lyrics here, and while he doesn’t make every song into a diary entry, I don’t think there’s any room to dispute whether or not he has a lot of real emotion in every bit of material in this record.

It’s true that Smile When You’re Wasted is a little rough around the edges in a couple of moments, and if you’re not the biggest outlaw country fan, it might even take you by surprise more than you’d prefer – but, with that said, it’s a sharp collection of songs that tells me we should expect some great things from its creator overall. Marc Miner is a new voice to me, and though I’m discovering his artistry as a virgin to the sound he wants to produce this fall, his vibe is that of a true professional and, more importantly, someone who believes in his own music and the deeper message it’s meant to convey.

That’s not as common as I’d like it to be as both a critic and a fan, and if you listen to Smile When You’re Wasted this October, I think you’re going to understand exactly what I mean.