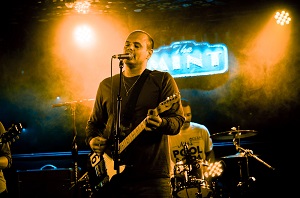 When did you first know you wanted to become a musical artist? What was the first song you ever wrote?

I remember going to sleep with a radio on as young as I can remember.  Back in 5th grade my parents got me a mini Casio keyboard with some basic beats available.  I quickly started experimenting with sounds and lyrics back then.  At one point, I had a folder with original lyrics to like 10 songs, but back then I didn’t typically have music with the lyrics.  Then, at age 11, I started to learn piano, quickly followed by electric guitar.  One of the first song’s I wrote with music was called “Little Johnny Wants to Rock.”  It was a three-chord, straightforward rock song with very simple lyrics and a nice steady beat.  I remember my first pick-up band was a few junior high school friends, and we had our debut show at my friend’s pool party, in front of like 10 people.  We played 3 or 4 songs—all covers, the most memorable one was “Just Like Heaven” by the Cure—a song my current band would later officially cover and release back in 2019 on Pop Fantasy.

I have like 20 bands in my top 5 list!  I love the energy and melodicism of Blink-182, I always thought they were a cool, non-pretentious band.  I lived in Arizona for a while, and there was a nice Tempe music sound that caught on pretty fast, so bands like the Gin Blossoms and the Refreshments had a big influence on me.  The Refreshments evolved into Roger Clyne and the Peacemakers, a band that I still vigorously follow.  When I was younger, I knew every Prince song, and I thought nearly all of his lyrics were speaking to me directly.  I felt like I was the only person in the world who actually understood him.  I guess that’s what a good songwriter does—they seem to speak to you directly and personally through their lyrics.  Prince was such a talent.  There’s a Mexican band called Maná that’s always been a big influence.  There’s also a band from Argentina called Enanitos Verdes—they write some really good songs—they’re super catchy, and still manage to have depth as well—check out “Luz de Día,” turn it up, and you’ll see what I mean.  Other huge influences include Local H, Nirvana, Huffamoose, Sweet Water, Mötley Crüe, Def Leppard, the Cars, the Police, the Dead Milkmen, and MXPX.

There’s nothing like playing live—especially in front of large crowds.  The bigger the crowd, the more energy and excitement.  When you start playing more and more shows, you notice people singing along with some of your lyrics, it’s a great feeling.  I work on our live set continuously so it will be as strong as possible.  I look at it this way—we’ve released 3 albums and an EP—we have well over 50 songs to pull from.  We definitely have enough material to select 12 really strong songs that fit together to make for one great rock show.  This is how I approach every live show—the best songs win.  We don’t just play something because it is new, it has to add to the live experience.  It has to mean something.  It has to get us closer to creating an experience that the audience will never forget.

Tell us about your latest release Radio Fiction.

Radio Fiction was designed to be an EP, although it actually has 9 total songs on it.  Traditionally, EPs have maybe 3 to 5 songs, and are under 30 minutes of music.  Well, perhaps we met the second part of that expectation as Radio Fiction clocks in just over 29 minutes.  The reality is, there really is an EP feel to it.  This is meant to bridge the gap from our last release, Faster Than Anticipation, to our next release, Last Call Before the Fall—which has already been recorded and is just waiting for a spring 2021 release.  We never really had a live record release show for Faster Than Anticipation as Covid-19 pretty much shut down live music in Southern California for a long period of time.  That was very unfortunate, because there are some strong songs on Faster, but for now we’ll likely have to wait until 2021 to get back to performing live again.  So, in the meantime, I continue to write, and we continue to record.

Is there a song on your latest Radio Fiction that stands out as your personal favorite?

The lead song is called “Show Me Everything That You Are,” and there really might be something special happening with that song.  There are many parts and dynamics to it—all of which just seem to click together and work pretty well.  As an artist you never really know which songs will resonate with listeners the most.  Some may really like “GPA”—a song about struggle and hope, which is based on a true story.  There’s also a nice version of the song “I Won’t Let You Down” which has always been one of my favorites to play live.  We call the version of this song that appears on Radio Fiction the “space mix” due to an added guitar part that seems to take you wherever you want to go.  I often wonder which song would I play for someone if they could only hear one song from us.  I think 9 times out of 10 my answer would probably be, “Ok, sit back and relax, put on the space mix of ‘I Won’t Let You Down,’ turn it up, and see if you can feel something special happen.  It’s probably the closest thing we have to like a “Purple Rain” type of song.

If you could play a gig, or co-write a song with any band or artist, who would it be?

Well one of my favorite things to do is to write songs, and I usually write between 50 and 100 per year.  Some of them fit with Dizzy Box Nine, and some don’t.  However, every now and then I’ll write a song and say to myself, “dang, this would be a great song to give to ‘this band or that band’ or whatever.”  For instance, I really admire the way Roger Clyne writes songs, and I feel I have written a few songs that he might actually like, and that would fit well with some things he’s done in the past.  I would love to send him a song idea or two and let him work his magic.  I also like a lot of MXPX material, I’d love to team up with Mike Herrera and work on something cool.  He has a cool way of writing, and I think we’d click.  A lot of rappers commonly team up, and one person writes one verse, and the other writes the other.  This could work with rock too.  I could see myself sitting next to Rhett Miller and working on a music idea where we switch off verses, or one of us does the verse, and the other the chorus, or something like that.  That would be super cool.  I can also see myself working with William Adams from the Black Eyed Peas, he has such a cool way of making great sounding music, I know we’d click and make something special.  Overall, I’m open really to working with anyone interested in working with me.