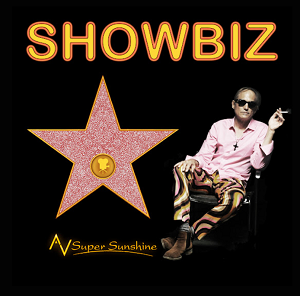 If you have followed AV Super Sunshine’s work since his emergence in the indie music world, you know the Wisconsin based singer/songwriter is full of surprises. You can never predict what new turn his future releases will take but his new single “Show Business (Glamorous)” constitutes surprise on a whole other level. There is only echoes of the rock bluster present in earlier tracks; this is a more lyric-focused track than many of AV’s previous efforts. Working with his longtime creative partner producer Michael Bradford, Sunshine’s “Show Business (Glamorous)” has revealed another side to his wonderfully varied musical character.

Some of the song’s lines are among the finest AV Super Sunshine has yet written. You can’t help but admire his willingness to bear his thoughts about the vagaries of supposed stardom without alienating his listeners. Such songs are almost as old as rock music itself, albeit scattered, and taking many different shapes. Lampooning peoples’ preconceived notions about what notoriety is all about may even seem like low-hanging fruit to some, but they are ultimately missing the point if they measure this song by that standard alone.

It is a near perfect marriage of music and lyric. The arrangement is fully fleshed out with several strands entwining to form a cohesive whole, not a single part out of place, and every segue masterfully turned. Its chorus peaks everything with just the right amount of force, never pushing too hard, but elevating listeners with just the right amount of lift. Those subtle variations between verse and chorus, the artful transitions between each passage, distinguish this song much like his earlier material.

Many listeners will admire the guitar and drum sound he achieves during the song. The strong rhythm section pulse anchors the song, and it has a sharp percussive crack that gives the track added urgency. Another important aspect worth mentioning is how it serves as both a total affirmation of Sunshine’s talent for long admiring listeners while still acting as a great introduction for those unfamiliar with his work.

His voice fills it with extra life. He really invests an audible sense of drama into this song, never overplaying his hand, and tinging the song with several unexpected vocal affectations along the way. These moments, in the hands of a lesser performer, would invariably sound pretentious, overwrought. Sunshine, however, brings it to life with all the aplomb of a master performer fully inhabiting his composition.

There will be more peaks to come for AV Super Sunshine. The Wisconsin born singer, songwriter, and performer puts to rest any lingering naysayers who believe modern music is incapable of packing the same power as previous generations. We live in a much more fragmented world now; in an earlier time, AV would likely be one of the biggest names in music. It doesn’t matter, however. He’s cut through the inherent limitations of his time and his music has entertained scores. There’s nothing about “Show Business (Glamorous)” that doesn’t suggest this trend won’t continue.