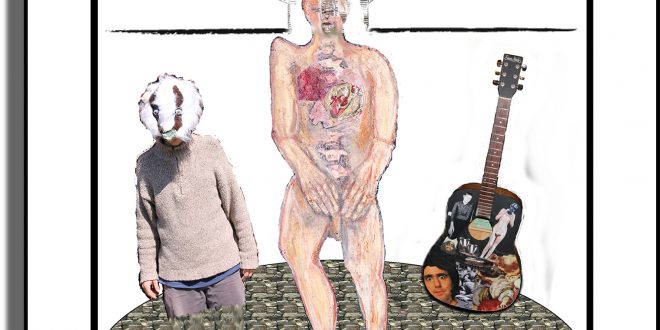 Presented in a half-whisper in “Cat Food Fairy” while offered up in an Alex Dingley-style punkish croon in “How Long,” Badgertrap’s vocal in his new LP Man Shed Head Crisis is easily one of the record’s most fascinatingly hypnotic elements to behold, but as intriguing as it undeniably is, it’s but one of this tracklist’s most sterling components for us to enjoy. In what is possibly the most diversely-appointed release to bear his moniker, Badgertrap injects emotion into every part of his music – from the grainy, groove-centric guitars of “Wax” and “How Long” to the psychedelic-tinged harmony that drives “Despite Everything” home – and in my opinion delivers an experimental offering via Man Shed Head Crisis that deserves all of the hype it’s been getting lately and then some.

Beyond his smooth execution of the verses that we find scattered between “Spandex Boy” and “Young Girls,” Badgertrap’s meticulous compositional skills are in top form here, and debatably exploited more evenly than they were in his last big release. “Scrotum,” “Slug,” “Sandwich-Sex” and “Well Up For It” are arranged to be a lot tighter than they needed to be, perhaps alluding to the notion that whatever we hear in Man Shed Head Crisis will eventually be reshaped for a live performance at some point in time, and while they don’t do a lot to eliminate the tension created by the songs sitting beside them, I don’t think that was their purpose. Contrarily, I think Badgertrap wanted to create an anti-cathartic descent into madness in this LP as opposed to producing something more straightforward in tone and depth.

I love the strange use of contrast in the jagged melodies comprising “Cat Food Fairy,” “Just Like School” and “Wax,” and on the strength of the originality exhibited in this trio of tracks alone, I would say that there isn’t a critic alive who could accuse this artist of trying to conform to commercial rock standards in 2020. He’s going out of his way to make sure that every major element in the aforementioned songs conflicts with the mainstream concepts that his closest rivals would just as soon spend the length of an entire studio album trying to perfect, and though some might regard his as being too rebellious an attitude to stay afloat in contemporary alternative music, I couldn’t disagree more.

Although I don’t see it scoring a lot of airplay on the watered-down spectrum of FM radio stations in the United States, I think that the audience for which Man Shed Head Crisis was crafted are going to find it to be as brilliant a release as I did upon its official release this spring. Badgertrap submits an eccentricity-filled treasure chest of tonality and rich sonic vitality in this album that you don’t find very often these days in any modern genre of music, and if his fans came into this release with high hopes to hear his best work yet, I think they’re going to be very pleased with everything it has to share.

User Rating: Be the first one !
Share
Previous Thermal and a Quarter release “Leaders of Men” (single)
Next Star Fish Prime (LP) by The Grunions