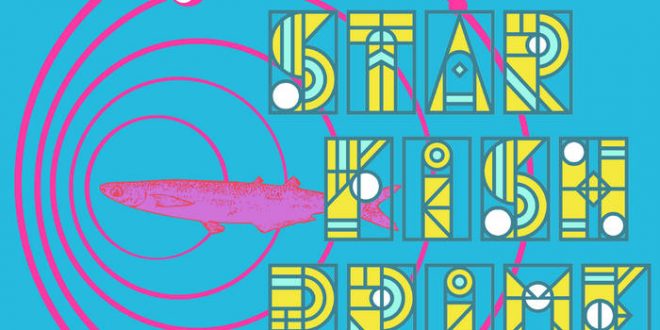 If ever there was a time to be transported to a world ripe with surf guitars, swanky sax and crisp drumming, this is it. The Grunions, a misfit group from Montreal, has it covered. Oddly named after a sardine-sized fish species, The Grunions worm their way around jazz, lounge music and progressive rock with the electric 10-track album debut, Star Fish Prime. Casting a wide net of dizzying, sticky guitar riffs and confident percussion, The Grunions are a larger-than life catchy band.

“Dr. Phantom”, track one, sets the stage afire with mysterious instrumental hooks, diving right into the Dick Dale-inspired riffs. Just before the two-minute mark a brash saxophone and clap join in on the wave of sonic bliss. So much of this sound and vibe is mod squad and 60s cult. It’s oh-so-fun party right out the gate.

Word travels fast as do the bongo drums in the salsa-like “Alpha Draconis”. The instrumental tones are not as bright as “Dr. Phantom” but the saxophone once again slithers its way through the song. Get those shoulders stretched and ready because you’re going to be moving ‘em. Did I mention the bongo drums? Gotta have the bongo drums and this song doesn’t disappoint.

As the songs stack up, so do the grooves and party atmosphere. “El Swoncho” is sultry and Tarantino-esque. Songs like “El Swoncho” and “St-Otto” exude cool and beg to be made scores to movies. In “The Scruncher” the dancing continues as does the deliciously crunchy guitars. My favorite part of “The Scruncher” is the organ – for some reason I kept picturing nuns rocking out and unleashing rock n roll during mass. Nothing suggests this song is religious – nothing – but the sweltering guitar and percussion fills illuminate all that this band can accomplish. Minus the sax on this one, though.

“Night Shift” feels epic. It’s a cooler breeze of guitar and murky arrangements. In “Vaqueros Rising” the crushing cymbals prepare the listener for a galloping jaunt – the horses seem to race across the mind. The personality of this track is daunting and rides like a heroic cinematic journey. “Makeout Island” is sneaky. The bongo’s are back, as are the psychedelic keys. “Hamspace” has this killer bass in the intro and as the waves of surf rock start to glisten and creep their way into the song, the keys start to fall down, raining drop by drop. As much as this song exhausts the senses, “Hamspace” fulfills rock and roll appetites.

Finally, “The Dark Comet Suite” brings back that ‘just around the corner’ wave of urgency. The saxophone is subtle again at first and the guitar work trippy. Like the tide, that saxophone just keeps coming in and out. What a way to conclude and an album – although in a case like Star Fish Prime, the listener will hit repeat over and over. And over.

User Rating: Be the first one !
Share
Previous Badgertrap’s new LP Man Shed Head Crisis (LP)
Next Luis Mojica releases How a Stranger is Made (LP)