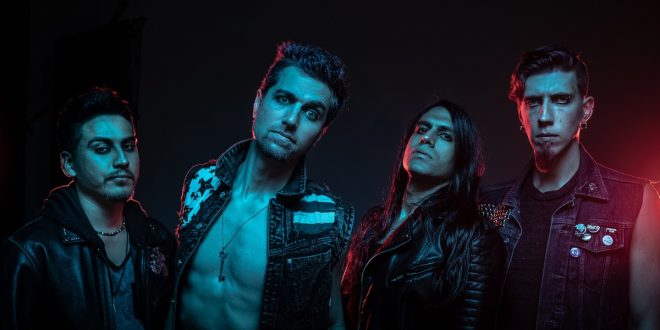 “Beaming Right Up,” the debut music video from Makes My Blood Dance

“Beaming Right Up,” the debut music video from Makes My Blood Dance, mixes old Hollywood class, dirty hard rock grit, erratic grooves that swing harder than most and some simple, band-centric shots that don’t waste our time with a lot of needless frills but manage to leave us on the edge of our seats just the same. We’re taken from a high-end backstage party to the center of the stage as the band slices and dices away at the chords defining the song’s stable rhythm. The drums collide with the bass in a violent display of sonic fireworks, the guitars pound us with the same intensity that the percussive beats do, and just when we think that we can’t possibly take any more, the bassline drowns us in its fuzz-filled melancholy. “Beaming Right Up” is a juxtaposition of pain and pleasure, fear and arrogance, and more than anything else, melody and relentless might, and while it’s a far cry from the black and white overdrive of a so-called throwback metal movement, it contains a lot more substance than anything I’ve heard out of that makeshift scene without debate.

This music video is visually stunning, and the grizzly color scheme that the images are filtered through lends an almost psychedelic quality to the song that simply isn’t there when we listen to it on its own. When I first heard this track on Spotify, I was charmed by its lush, multilayered mix, but I didn’t pick up on the cerebral linchpins in the construction of the grooves until I saw the video just recently. Part of it could be the influence of the camerawork’s eclecticism, but it could also be that I’ve had a little more time to study the underlying textures in this single (which, I must admit, are plentiful to say the least). There’s more to Makes My Blood Dance than there is the average rock group trying to break into the mainstream in 2019, and as they continue to find their footing in the international pop lexicon, I think that they’re going to get more comfortable in experimenting with the depth of their sound, which is something that could possibly yield countless chest-pounding treasures.

There’s not a lot of hesitance in Makes My Blood Dance’s delivery in this white-hot single, and while I’m sure that they’re going to sound a little different once they grow into their style a bit more than they already have, there’s a lot of reasons that rock enthusiasts should be paying attention to this band at the moment. Their music has a DIY rebelliousness to it that is actually really endearing, and despite a few minor elements that I would have tweaked differently than they did, their debut video is a startlingly chic piece that doesn’t particularly remind me of anything else currently trending in hard rock or heavy metal. My gut tells me that if they take the experimental side of their sound to the next level, they’re going to be one of the more exciting young acts to keep up with, but I’ll be checking out their new music as it reaches the public regardless.