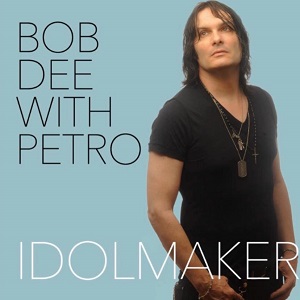 Bob Dee with Petro “(I’m Not Your) Steppin’ Stone”

A hard wave of distorted melodicism hits us like a ton of bricks upon pressing play on the new single “(I’m Not Your) Steppin’ Stone” by Bob Dee with Petro, and as we listen on, the angst of the music only grows stronger with each beat. There’s instrumental girth to be taken into account here, but once he starts to sing, Dee’s presence becomes the most powerful and important component of the mix. He’s got the charm of an old-school rockstar in this performance, and without overexploiting his abilities to the point of sounding campy, he delivers what feels like the right kind of classic rock performance for a new generation of fans. Petro has been compared to retro acts before, but here, they’re clearly sinking one foot into the future – on the back of these riffs.

I’ve always been a bit of a guitar nerd, and the tonality we find in “(I’m Not Your) Steppin’ Stone” is the reason why. This isn’t solid state amps pumping out a generic six-string riff by any measure; there’s a warmth to the tonal element of the fretwork that gives me chills every time I listen to this song, and not solely because of how well Dee straddles the groove of the guitar. He’s a guy who definitely cares about quality where it counts, and though the backing band shouldn’t be given all of the credit for the excitement in this single, the guitar parts are especially deserving of the spotlight they earn almost exclusively on their own here.

When Bob Dee is singing, he owns the room, and that isn’t just the case when he’s on the stage somewhere. In this studio performance, he grips the audience with a panache that is difficult to rival unless you’ve been making rock n’ roll music for the better part of the last ten years like he has, only getting better with age rather than jaded. His voice has become more refined, but he’s still able to express a raw, gritty vulnerability that some artists are terrified of giving themselves over to. Petro is just as good as they’ve always been, and when joined with the full force of this singer’s pipes, they produce harmonies as big as the heavens above us in “(I’m Not Your) Steppin’ Stone.”

After listening to all of Idolmaker, the new EP from Bob Dee with Petro, ahead of its official release date, I knew this was going to be the most lauded song from the tracklist, and I’m not at all surprised that it was chosen as the lead single to rep the content of the disc. It embodies the energy of the record brilliantly without overstating what listeners are going to get into upon getting a copy for themselves, and more than this, I think it serves as a good segue from generic radio rock into something more sophisticatedly indie like Dee’s sound. He’s bringing more love to the underground with this play, and his longtime fans will be particularly pleased with what they discover in this single.