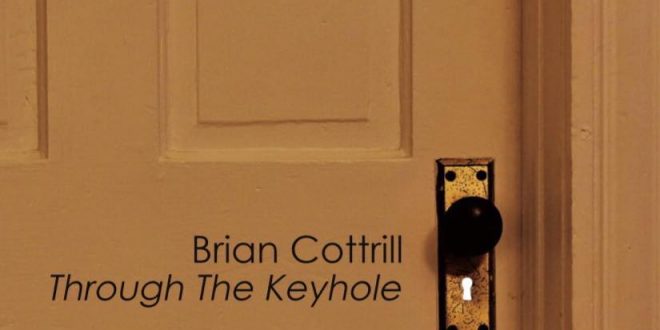 Brian Cottrill – Through the Keyhole

Brian Cottrill understands the value of an attention grabbing opener. “Remember My Name” is built around acoustic guitar, vocals, and harmonica, but it bubbles with the energy of a full rock band at work as Cottrill throws himself headlong into the performance with instrumental talents and singing full of zest. I especially like the lyrics – there are a number of unexpected phrases and rhymes throughout the song, enough to convince you of Cottrill’s individuality, and they link up well with the spartan arrangement. His harmonica playing is melodic and never sounds arbitrary or clichéd. The opening track for his debut solo release Through the Keyhole sets the stage well for everything to follow and sweeps listeners into the work.

The one song varying from the album’s acoustic template of guitar, voice, harmonica, “Erica”, adds violin to the mix with impressive effects. It gives a thoughtful air to Cottrill’s musing about his daughter and helps convey the song’s emotion for listeners without ever doing so in a hamfisted way. There is a certain amount of welcome humor laced through the song “All I’ve Got Is You”, but there is real pain as well that comes across through Cottrill’s lyrics and the wealth of significant detail embedded in the song makes it an even more enjoyable listen. The same talent for writing memorable choruses we heard with the opener comes back here and serves as a hinge upon which the remainder of the song swings.

The album’s fifth song “The Murder Farm” is not for everyone, but it comes from a definite tradition. You can hear the latent folk singer in Cottrill coming through in this song depicting a terrible murder of several people, including children, and Cottrill doesn’t spare the listener any of the gruesome details. It’s never morbid however; just horrifying. He brings a tremendous amount of brio and indignation to the performance that definitely puts listeners on Cottrill’s side, but there isn’t a lot here to sweeten the song and make it a more pleasing listening experience. Some will enjoy that. Some will long for a little gloss to make this catalog of horrors more palpable.

“Lost and Forgotten” is a nice follow up to the aforementioned tune and gives listeners a chance to breathe again. It is a well rounded, introspective, and thoughtful example of top shelf songwriting. Anyone over the age of forty will find much they relate to in this song. It’s the obvious product of looking back over a lifetime with a mix of regret and forgiveness and benefits from a strong harmonica melody that punctuates Cottrill’s vocal at various points during the composition. “Uncertain Keyhole Jangle” is a track many will return to after an initial hearing because the abundance of lyrical gems is so great, but the musical elements of the track deserve repeated hearings as well. The choruses for this track are especially effective.

“Sammie Lee” has a near eight minute running time and extended lyric that Cottrill surrounds with intelligent guitar playing intent on giving it more dramatic weight. His efforts are successful. The production for this release doesn’t have a lot to capture, essentially three instruments, but you can’t say enough about the intimacy he achieves. This song about his parents obvious draws comparisons with the earlier track about his daughter, but the songwriting has a different flavor here. There’s an impressive amount of diversity on Through the Keyhole despite the limited instruments included on the release. Brian Cottrill’s solo debut has something for everyone who loves honest, unadorned songwriting.