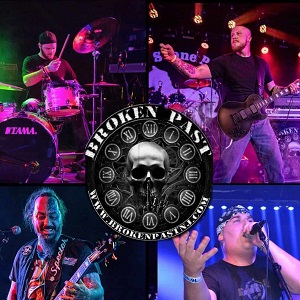 Broken Past releases “Some Gave All”

New Jersey’s Broken Past is a four piece heavy metal band embracing a wide variety of influences. Strands inspired by artists as diverse as Black Sabbath, Bret Michaels, Overkill, and AC/DC, among others, coalesce forming the basis of a highly individual sound and approach. Bassist Tony Rodriguez first formed the band in 2015 and recently released their first studio recording, an EP entitled Time for Change, further establishing them as a force to be reckoned with on the modern music landscape. Jersey can’t contain this sort of headline talent for long and the single “Some Gave All” shows they are increasingly ready for the spotlight.

Their songwriting skills are sharpened to a fine edge. “Some Gave All” has impeccable construction that helps the performance unfold in a logical yet gripping fashion. You invariably know what is coming, the song does have a certain amount of musical predictability, but the charge hearing this track comes from hearing how Broken Past get there. Their instrumental prowess and band chemistry is far beyond their years together. They play like a band together for ten years rather than half a decade and their interplay crackles with an intuitive understanding that all the best bands share. The chorus is especially effective.

Wayne White is a showstopper on guitar. His lead playing pops later in the song but the embellishments he adds to the piece from beginning to end provide critical shadings of colors that help the track stand out even more. The rhythm section for the band, bassist Tony Rodriguez and drummer Bryan Stager, are a powerhouse engine room for the unit and never come off as flat-footed or bland. The trio have a tight grip on the track’s dynamic potential – it’s rewarding to hear them blast through the song’s tempo and texture changes without ever missing their marks.

The video blends stock footage from various battles and conflicts, band performance, and graveside services. It is a simple but effective premise. Part of the reason for its effectiveness is thanks to how it reinforces the song’s subject without ever coming off as overbearing. There’s obviously been a great deal of care assembling this promotional clip and it is a good match for the single.

Frank Acee comes off, vocally and in the video, as a man you shouldn’t doubt. His singing has a hardboiled yet heart on its sleeve quality that catches your attention from the first line and never lets go. He peaks at all the right moments, dovetailing his vocal to complement the music, and knows when to back off and force the issue. Everything comes together here to make a top shelf track. “Some Gave All” is an obvious choice for a single for a variety of reasons but the biggest is that it is a fine song that never cheats the listener. It’s a quality that will keep existing fans for years to come and draw in admirers with each new release. Broken Past has all the essentials to make a mark for years to come.