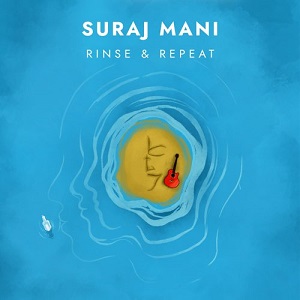 “Rinse and Repeat” by Suraj Mani

The voice behind the new track “Rinse and Repeat” is not new for many. Suraj Mani, former lead singer of Indian rock band Motherjane, takes the reigns in this hauntingly beautiful track with the same confidence of a singer with more than a decade heading a rock band. With hints of newness in his voice, he proves that a fresh start can develop from the purest forms of songs. “Rinse and Repeat” showcases Mani’s natural, confident vocals with little emblems of vulnerability.

A deep-rooted voice in the rock realm, Mani’s voice is magnetic. He sings with the same gusto as Meatloaf or with the same stronghold grip of Freddie Mercury. When Mani, who Indian audiences have endeared as ‘The Singing Sensei’, sings I won’t allow myself to be used, he’s not just singing words on a page. He feels these words and in turn, the listener soaks up the lyrics as if they were a part of their own diary. “Rinse and Repeat” uses many of the same stanzas, but it’s Mani’s moving vocals that keep this track fresh and unique around each corner. He triggers an immediate reaction, quickly turning the listener onto his baritone voice that thrives along the lonely, acoustic guitar. Much of the song sounds isolating, with the listener lingering with each note as if they were the lone stranger inside the recording booth alongside Mani.

The guitar work in “Rinse and Repeat” stirs along like a rapid river, only getting pushed aside by taps. The thumping of the acoustic guitar’s body, interrupting the flow, is symbolic of the hurt and the ‘giving in’ Mali professes. I think this song is about the tales we tell ourselves. We won’t get hurt, we won’t allow ourselves to be used, only to fall deeper and deeper into a relationship were we do the exact same thing. Time and time again, we trap ourselves into the cycle. The pain in Mali’s voice is dramatic. While the guitar is solid and consistent, Mali’s multi-dimensional voice can roar and nearly cry in a moment’s notice. At times the silence between the words is just as deafening as the passionate delivery. By the song’s end, he holds the note on the word repeat for what seems like an eternity. Then, with a frank sigh in his voice, the song is over. He appears to have used all his energy, all his might; that last gasp is a look towards the future, where once again things will be repeated.

Mali, whose press materials call him a rock poet, earns this title with flying colors. “Rinse and Repeat” pieces together a telling story and even more so, a world of emotions that connect with listeners in any language. Mali’s impressive vocals and the beauty he fuses with the guitar is just one of the highlights in this pop rock song. Contemporary music listeners will be floored by the bare bones production and its enticing, evocative vibe. “Rinse and Repeat” is worth the journey to the heart.

The music of SURAJ MANI has been heard all over the world in partnership with the radio plugging services offered by Musik and Film Radio Promotions Division.  Learn more https://musikandfilm.com