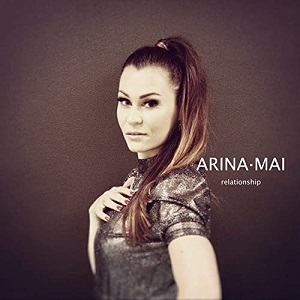 Changing her tempo, but not her core sound, Denmark’s Arina Mai is back with her new single “Relationship”. A departure from her previous single “Get Closer”, Mai unmasks a faster, more electric beat. What stays the same is her abundance of emotion in her ethereal voice. Always intimate and always graceful, Mai displays a unique artistry that seems to be growing before our very eyes. “Relationship” has the building blocks to take her to the highest levels and is from the album Imperfect, produced by producer KP Larsen.

Starting out like a pop rock tune. “Relationship” immediately relies on a trippy beat. The song has this feeling of being on a ladder, each rung is a step higher and a step closer to the goal line. The movement in the electronic pulses is just on fire, and lighter-fare found in Mai’s voice is a nice, natural tension. Feeling now I’m working / feeling now I’m worth it / feeling now I want our relationship / seeing now I’m working / seeing now I’m worth it / seeing now I got our relationship, she sings. I loved how she transitions from the ‘feeling’ to ‘seeing’; it reminds me of working out for months on end, and you feel like you’re putting in the time, in the commitment. You feel your body changing, but not until the scale says otherwise or your clothes fit loosely, does it really strike you that it’s real. The same, of course, for a relationship – you can think you’re moving farther along and making strides, but actions speak louder than words.

Born and raised in a small city near Copenhagen, Mai’s presence is edgy, confident. I think if you would flip the script some, and her writing about the start of the relationship, the music wouldn’t be in the same range. It wouldn’t have the sprite, the same spirit. “Relationship” relies Mai’s natural harmonies, and the backing music is at times flush with electronica. It’s a fire and ice feeling, whereas Mai’s revealing vocals caress the listener. She’s comforting, but just as easily independent. A part of me wants to call her voice meek. She’s much more powerful than that. Her natural, almost effervescent sound is quite exhilarating compared to the modern, toyed-with, and sometimes scratchy music bed. It’s pretty cool. At just about the three-minute mark, a pong-like series of bleeps signal a different music bed layer. The song ends with a similar one-two-three, escalating key. It’s like the door is opening once again, a new rung is to be climbed and she’s closer to happiness. It’s just on the other side of that door.

Mai’s sound continues to enthrall me. Her voice is captivating and the changeup she shows in the music bed creates another fascinating layer to her artistry.  She takes different steps in different directions, but she doesn’t sacrifice her musical foundation. Working with Larsen has proven magical for Mai, the collaboration continues to give voice and amplification to a small, but mighty voice.