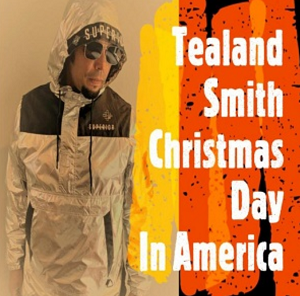 Christmas music isn’t as easy to make as you might think. The classics are, well, the classics, while new content can be polarizing for the very reason that it hasn’t been playing in the background of every family Christmas for the past fifty years; however, in the new single/video combo “Christmas Day in America,” I think Tealand Smith successfully strikes a balance between old and new that will have a lot of holiday music-lovers abuzz this December. With his voice as the catalyst for every cathartic moment here, Smith acts as a beacon of warmth in what has been an all-around chilly year in “Christmas Day in America.”

There’s nothing overdone about the hook in this song; in fact, I would even go so far as to say that without the panache of the lead vocal, it wouldn’t be very enthralling at all. Something that immediately grabbed my attention when I sat down to review this song just the other day was its stealthy means of drawing us deeper into its web of melodic wonderment. The structure is so black and white, and still this singer uses a smoldering harmony to make it seem as though we’re hearing a symphony of the season compacted into a perfect R&B slow jam.

I love the homespun tone of the video, and while it’s not at all the minimalist piece that its source material is, it gives “Christmas Day in America” that added polish that almost always separates the studs from the duds on the FM dial. As much as indie disciples try to fool themselves, a little bit of production varnish can go a long way when making something born out of the pop songbook – hence, in a seasonal track like this one, Tealand Smith sounds like a legit baller with a properly-mixed single while never having to abandon any of his anti-commercial convictions.

The production quality of this song and its music video aside, the composition itself sparkles with a delicate sensibility that almost ensures a singer like Smith is going to be able to score some big points with its primary melody. I really hope he challenges himself with something a bit more complicated for his follow-up, and not because I don’t find this to be an incredible performance worthy of some hype. I can tell he’s got more in the tank, and now it’s just a matter of getting him to put a little more gas on the fire so we can see how big this blaze can become.

If you’re into Christmas music or just like premium R&B that doesn’t sound like a straight-up Pepsi advertisement, checking out what Tealand Smith has been up to in “Christmas Day in America” should be considered a must this December. It’s alright to be a bit particular when it comes to this pop subgenre of songs and further storytelling in melodic form, but if there’s one thing I’m certain of in 2020, it’s that the majority of listeners who examine Smith’s sound are going to be very pleased with what they hear.