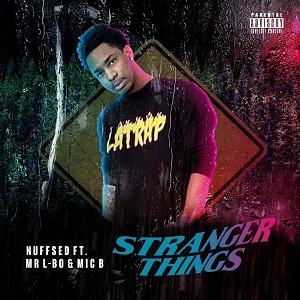 From dusk ‘till dawn, the streets to the rooftops, Neff Nuffsed is on a mission to unleash high grade trap vibes in his new single “Stranger Things” with Mr L-BO and Mic B, and although the video for the track is rather elaborate, it lives up to the energy of its soundtrack brilliantly. “Stranger Things” sports a chest-beating rhythm that could make just about anybody get excited about modern hip-hop, but were it not for the spirit its contributors provide to the mix, I don’t know that it would be the communicative spotlight vehicle that Neff Nuffsed has transformed it into.

This trap beat almost feels like it’s been surgically modified to sound like a war drum leading us into battle, but I don’t know that I would call even the deliberately callous elements of this song inauthentic or plastic. The truth of the matter is, even the tinnier percussive pulsations in the backdrop have an important role to play in this performance, and I wouldn’t change their tone for one enormous reason – this is the best way to highlight the vocal skillsets of all three collaborators involved in “Stranger Things.” It’s a bit retro if you think about it, but this doesn’t make the song itself sound like a throwback at all.

There’s absolutely nothing shaky about the rhythm here, nor the lyrical execution that we’re treated to. Neff Nuffsed, Mr L-BO and Mic B are all really incredible players that seem to have a really easy time playing off of the same cues and working out the same kind of a groove with their verses. They stop short of sounding like a synced-up group, but overall I think it would be smart of them to consider collaborating on something additional to this in the future (and particularly when they can get on the road together).

I didn’t know about Neff Nuffsed or his cohorts before I got ahold of “Stranger Things” through a colleague in the industry just recently, but if this is a fair encapsulation of his ambitions as a songwriter and rapper at this stage of his career, I see no reason to slow his professional roll right now. If anything, he needs to step on the gas and take advantage of the momentum he’s got – after all, it isn’t every day that you’re able to produce a collaborative piece that comes off as smoothly as this number does.