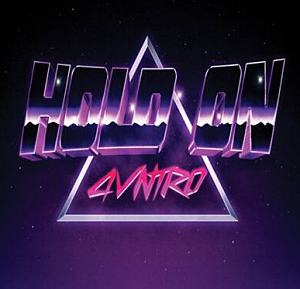 “Hold On” (SINGLE) from Qvntro

You don’t need a lot of lyrical substance with a groove that is plenty communicative in its own right, and if there’s one track proving this beyond a reasonable doubt right now, it’s the new single “Hold On” from Qvntro. From the moment that we meet the sturdy bassline at the beginning of the song to the very second it disappears into the shadows from which it was first sprung, brawn is the priority in the mix. We’ve got nowhere to run, nor anywhere to hide from this beat – Qvntro aren’t letting us get out of 2020 with some mad rhythm, and this might be among the best I’ve heard in years.

The percussion in this track swings about as hard as boxer on steroids, but there’s no debating whether or not the bassline here is driving the beat more than anything else. Its melodic definition is slightly muddled simply by the girth of the groove, but this isn’t a problem if you’re as susceptible to the energy of a sexy club rhythm as I am. Qvntro aren’t interested in giving us acrylics or particularly toned harmonies in this piece – this is about releasing aggression and pent-up emotions of all sorts, and it’s timed quite well with the current state of society in 2020.

Despite the synthetics that comprise the melodicism in this single completely, there isn’t an overwhelming sense of sugary pop inauthenticity from the core of this track’s hook. Instead, subtlety is a much bigger theme in this arrangement, with everything working off of the pulsating groove and nothing else (this includes the lead vocal, mind you). What would seem in a casual glance like a simple house mix is actually rather complicated here, but that’s truly the magic of this act’s style of songcraft.

It would be really interesting to hear some remixes of this song in the future, not because there’s anything wrong with this incarnation but instead because it would be intriguing to see just how flexible its bones really are. There’s definitely a hip-hop element you could apply to the blueprint behind the beat, and if you tweaked the levels a bit (and softened some of the background melodies into surreal soundscapes) there’s absolutely an ambient tone you could draw to the surface here. I like what Qvntro have set up in this template of sorts, and it would be fascinating to see and hear how it could be manipulated even further.

If this is what Qvntro’s sound is – and, more importantly, who they are – then “Hold On probably isn’t going to be the only hit they have in their discography in this new unfolding decade. It will be very interesting to see how the present situation in the world plays out with regards to a DJ culture built off of a large crowds feeding into the same energy source, but with jams like this one, I don’t believe too much will change for the negative in the years to come.