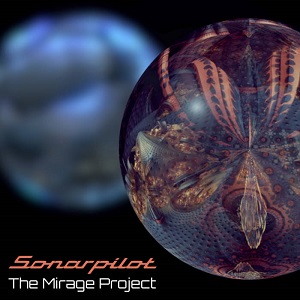 We’re four minutes into the music video for the fifth installment in Sonarpilot’s The Mirage Project, titled “Cathedral,” and it’s as though a symphonic string section is overtaking the speakers with an electropop dynamic literally born in the heavens. There’s so much that we’ve already experienced in this song by now, but after the next sixty seconds go by, another phase enters focus and we’re under the direction of a bulging bassline capable of issuing utter destruction if it sees fit. Sonarpilot is taking the gloves off, and we’re in his sights. His is a larger than life ambience you have to feel to believe, and it’s definitely worth the hype it’s been attracting.

Both “Cathedral” and The Mirage Project’s “The Last Machine” (#6) come together bit by bit, slowly but surely taking shape over the course of about ten minutes’ time each, but they don’t spend this period getting overly cerebral with their melodic statements. There isn’t any self-righteousness clouding Sonarpilot’s view here – in fact, I think this could be some of the most direct material he’s put out under The Mirage Project title. He’s got no time for bells and whistles – there’s muscularity to be accentuated, and that seems paramount above all else in both of these tracks.

The two videos capture a surreal vibe the only way you still can in 2020; by putting us into the darkness of outer space and showing us whatever strange scientific artifacts might be drifting around there. There could have been more props and yes, there could have been some additional context to the theme beyond what we’re getting in either one, but I like the minimalist approach Sonarpilot went with in this instance. The music, after all, is his primary agent of communication, and trying to skew that with something more elaborate for the first time would be a bit out of place for someone who has been in the game as long as he has.

I really like the mild clubby energy that manages to find its way into the mix of “The Last Machine” somewhere between its commencement and the conclusion of the song, and to some extent I think this proves just how much versatility its creator has beneath the shocking size of his sound. Skill is everything when making an engaging ambient project, and whether you’re new to Sonarpilot’s work or not, it’s obvious he has something special within this medium when listening to his music.

Admittedly, I’ve been pretty impressed with the past content Sonarpilot has released in the underground, and I must say that he does not disappoint with this most recent output at all. The Mirage Project is a watershed for this next juncture of his career, and as we get introduced to its many facets, this becomes all the more difficult for any critic to deny. Sonarpilot is an artist who deserves your respect, and if you weren’t sure about that before, “Cathedral” and “The Last Machine” just might change your mind.