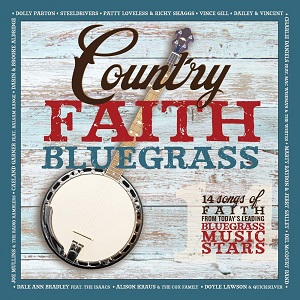 Compilation albums are usually hit and miss affairs. There is usually little effort, frankly, put into assembling such collections. They are released as afterthoughts or cash grabs from fly by night companies. There are often shaky licensing agreements justifying the presence of some songs, outright illegality in the case of others.

None of that is the case here. Country Faith Bluegrass, the first release in the Country Faith series, shows great attention paid to producing the best possible release. The fourteen songs selected for this album follow its theme without fail though keen-eared listeners will detect country and blues influences creeping into the songwriting and arrangements.

Most of the songs, however, are pure bluegrass. Vince Gill’s “All Prayed Up” has impressive momentum from the beginning and proves to be a shrewd choice for the album’s first song. Gill has a great reputation as a bluegrass performer as well as a mainstream country artist and this song is representative of his work in the former style. It’s also illustrative of the compilation’s general attitude. It does not aim to serve notice to sinners and warn of impending doom. It doesn’t point fingers and denunciate groups of people. These songs are testimonies of faith, for the most part, and that’s a welcome slant on the theme.

Larry Cordle, Carl Jackson, Bradley Walker, and Jerry Salley provide top flight support for Dolly Parton on the classic “In the Sweet By and By”. This Christian standard is another example of a song that defies belief; anyone, even Atheists, should be able to find merit in this song. Parton’s version of the track is lilting, gentle, and creates a wonderful dream-like state she effortlessly sustains.

Dailey and Vincent’s “By the Mark” will impress many bluegrass devotees. It is one of the album’s original tracks and stands well alongside some of the genre’s best. The duo gives the track additional gravitas without ever overpowering the cut’s delicate structure. “Working on a Building” from The Issacs and Dale Ann Bradley invokes all the time-tested beauty of A.P. Carter’s original, but they infuse it with their own musical character. The loose, slightly rough-hewn blues sound mixes well with Bradley’s voice.

“Rank Strangers” is a wonderful performance of Alfred E. Brumley’s classic song that doesn’t attempt to displace The Stanley Brothers or later performances. Joe Mullins and The Radio Ramblers, instead, carve out their own niche that captures the existential regret and loneliness of the original while following its own path. Ricky Skaggs and Patty Loveless’ “Daniel Prayed” is another of the best songs on Country Faith Bluegrass.  This breathtaking team show, if it needed proving, that their bluegrass chops rank up there among the best on this album. Many will love the strong characterizations and storytelling behind this song as well – they are sketched out in the lyrics, illuminated by broad strokes, and never belabored. Nothing feels forced on Country Faith Bluegrass. The songs come off as an effortless utterance of the spirit rather than calculated entertainment.