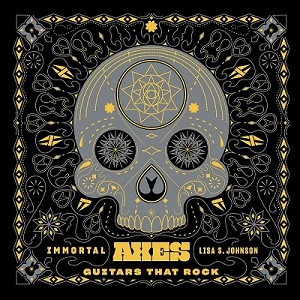 For the record we don’t normally review books on this platform, but in this rare case we made an exception. Why you ask? To put it simply – “Because it Rocks.”

Veteran rock photographer Lisa Johnson’s new book is simply titled Immortal Axes: Guitars That Rock. If the semi-esoteric first part of the title is any indication, the book isn’t just about the literality of the various iterations of electric and acoustic guitars it showcases. It’s about what they represent, as much as it is about the process they played a critical role in. In an exclusive foreword written by featured musician Peter Frampton, he states: “It’s interesting. I can still remember (my) first three guitars like it was yesterday.

And the truth is, every guitar I’ve ever owned comes with its own unique story and set of memories. Each one has been notable in its own way, whether it was an inexpensive guitar I bought when I was a youngster, or the more famous instruments featured in this book…Every picture in (Immortal Axes) captures the unique character and personality of these iconic instruments. You might not know every story behind these guitars, but you get a sense of their adventures and what makes them special through (Lisa S. Johnson’s) brilliant lens. She captures their essence, which only an artist can do.” This is reflected through Johnson providing blurbs and sometimes full-on short stories for each of the pieces she showcases throughout the various pages of Immortal Axes.

One of the most impactful is her featuring of Peter Frampton’s 1964 Epiphone FT-79 Texan Acoustic-Electric guitar, a bright black with a slightly faded silver bridge and set of strings. She writes, “Although you wouldn’t be able to tell, this acoustic guitar survived the 2010 floods in Nashville, where it was underwater for three days. The guitar was dried out for several years, during which time it was tuned down four and a half steps to prevent the bridge from pulling loose.” The flip-side today? “In 2018,” Johnson writes, “it was tuned up and still sounded fantastic…(when) it was restored, (Peter) decided to keep it, along with the remnants of his signature. He wrote two of his biggest hits in one day on the Texan: ‘Do You Feel Like We Do’ in the morning and ‘Baby, I Love Your Way’ in the afternoon.”

It’s through the personalization effect(s) of aforementioned passages like Peter Frampton’s Texan Acoustic-Electric guitar that Johnson reaches past the echo chamber of the music fan. She connects the dots between the book’s select topicalities, and the wider world that is touched by such topicalities’ most rewarding quality. Music, she effectively states, goes past being just a form of auditory entertainment. It has an almost sacred value, the guitars featured in the book taking on almost totem-like statuses.

You can’t help but find the whole thing genuinely emotional and touching, sometimes – if you’re like me – even a little bit overwhelming! The love Johnson has for each and every instrument, along with the love featured in all of the book’s musician profiles, is infectious. Even for the most jaded or hardened cynic, it would be difficult not to be moved by the stories, dreams, and passions birthed from the ingenious simplicity of the six-stringed, quintessentially American invention called the rock guitar…