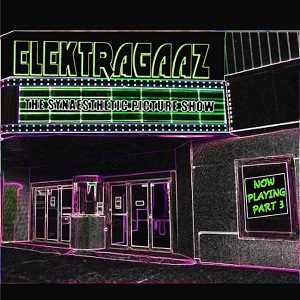 Stylistically speaking Elektragaaz is a super unique musical experience founded by a reclusive Frisian composer who goes by the name Poppo Redband, and a group of talented musicians from the New York Metro area. Their hird EP, “The Synaesthetic Picture Show Now Playing, Pt. 3,” was released on September 14th 2021. It contains six tracks that go from electronic to cinematic to psychedelic to jazz. The songs capture your imagination and hold it hostage, transporting you instantly. That can be the advantage of songs that have vocals; the melodies and beats become immersive as the listener can infuse them with their own experiences and thoughts.

“Dancing With Evil Intent” starts off “The Synaesthetic Picture Show Now Playing, Pt. 3” with a seriously ominous feeling. It sounds like the beginning of a spy movie or some sort of moody Broadway musical and it quickly draws you in. It feels like it’s building up to something scary, but as the song ends and the next song begins, you’re whisked in a totally different direction. “Santa Fe Gas & Electric” is super bubbly and upbeat. The fiddling brings up images of traditional folk dances and farms. There’s something  classic about it, but it also feels modern and fun. It feels almost painfully joyful.

The third song the the EP, “Sebastian’s Apple” has a video game vibe, it feels like you’re wandering around a pretty map. This track is inviting and friendly, like a fresh apple pie or a sunny forest full of wildflowers.  Following up the loveliness of “Sebastian’s Apple,” “To Air Is Human,” feels a little darker again. This track feels more anxious and agitated, but also plays off of the video game sound of the previous track. It sounds more like boss fight music or something of equal tension. It made me think of a giant cloud of crows all darting in different directions.

“Joyboy on the Beach” brings the sunshine back in with a strange surfer rock/jazz sound. It definitely captures the simple pleasure of being near the ocean, as well as the respect for the water’s power.  While it’s a more easy going song than some of the others, it has cool time/rhythm changes that keep it memorable. The very last song on “The Synaesthetic Picture Show Now Playing, Pt. 3,” “The Ghost of Ozymandias,” is absolutely killer. It’s a trippy psychedelic rock song with a beautiful meandering lead guitar. It’s a great end for “The Picture Show.” Ghosts obviously represent death and closure, so I feel like it’s a good signifier that this is the end of the ride.

From top to bottom, “The Synaesthetic Picture Show Now Playing, Pt. 3” is an incredibly solid EP. Elektragaaz and Redband are insanely talented and have been able to create something wholly their own. While they blend every sort of genre together, it doesn’t sound like any particular one. In a world saturated in music, I think they’ve come up with something that will make them stand out and gain them the recognition they deserve.