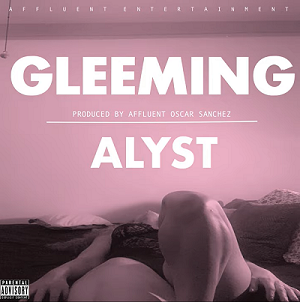 Bass. Minimalist groove. Eroticism via a restrained vocal delivery. It doesn’t take much to draw together a certifiable hit in hip-hop when you’ve got the kind of talent ALYST does, and in his new single “Gleeming,” he puts that talent to use in an efficient, brilliantly thoughtful expression of self. Instead of employing linguistic charm exclusively, his reach extends into the backdrop, nudging the bassline towards us and spotlighting the clandestine tension in the mix through verse-powered rhythm (as opposed to relying on the percussion exclusively).

There’s no separating ALYST from the beat; honestly, there are more moments in which he is the beat than there are him following percussive componentry. He isn’t stepping back from provocative concepts, and while there’s an argument to be made for the straightforward side of contemporary rap, I think that the progressive look ALYST is offering us in “Gleeming” is going to prove a lot more seductive to those who might not go for the boxier compositions currently charting in rap. His vocal is at center stage in this performance, and the synthetic filler a lot of his competition would just as soon cultivate an identity around is simply nowhere to be found.

Affluent Oscar Sanchez stops in for a guest spot in this single, and personally, I think that the chemistry he shares with ALYST alone makes this a really interesting listen. There’s no competing for the lion’s share of our affection here; ALYST is the clear-cut dominant profile in the mix, but his counterpart is backing him with enough heat to set your house on fire.

My man’s lyrics speak to ambition as opposed to arrogance, and although there’s a lot of moxie driving him to chase the grandeur in the narrative, scarcely is there a point at which he doesn’t sound somewhat humble (largely thanks to the tonal presence he has as a rapper). He’s a lot more relaxed behind the microphone than some of the other players I’ve been listening to in his peer group and both in and outside of his scene at the moment, and if he can push this on the live circuit, he’s going to be a tough act to follow anywhere you catch him.

There’s still a tremendous amount of potential that ALYST has left to unlock at this moment in his career, but I think what he’s putting down in “Gleeming” is a decisive demonstration of what he can do when he’s firing on all cylinders. Affluent Oscar Sanchez turns in an amazing release here a well, and I believe that when all is said and done, the hybrid aesthetics of this piece are going to wind up being the biggest headline-maker as a result of “Gleeming” arriving this fall. ALYST is a hypnotic force when he’s in the studio, and as long as he keeps hitting the chords he is at the level he’s at right now, it’s difficult for me to picture his getting anything but bigger in the industry – and among those who would just as soon claim to be shaping it.