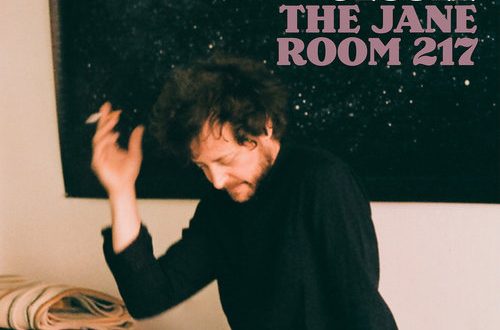 Like many albums, Darren Jessee’s first solo album The Jane Room 217 began life as a series of demos and you can still hear much of that original spirit throughout the recording. The foundation of the release is Jessee’s softly emotional voice and his acoustic guitar, but transforming the recording into an album ready for release brought in other instruments like violin, courtesy of Trey Pollard, light keyboard touches, and some keyboard phrases. There such studied restraint in this release and you can see that his avowed models – Leonard Cohen, early Tom Waits – shining through each song. Much of the songwriting concerns itself with relationships and the first track

“Anything You Need” kicks that off. This is a love song, basically, and I enjoyed the transitions that carry the listener from one section to another with the sort of satisfying seamlessness that distinguishes classic songwriting from by numbers fodder. “True Blue” shows off another side of Jessee’s voice as he moves into a higher register for some of the vocal passages and those provided me with much pleasure during the song’s chorus. I think, likewise, it takes a fairly audacious sensibility to title a song – the history of pop songs with this title is comparatively long and littered with disposable pop.

“Letting You Go” is a painful love song, painful in the sense that Jessee’s songwriting perspective delves deep into reflecting on a broken relationship with bittersweet notions about the hows and whys. The glittering wash of keyboards is pointedly subtle in its efforts to complement the guitar and vocals. The Jane Room 217’’s songs are shapely – I lam inspired by how he dovetails each passage into the next with this cut. “Ruins” is another sharp lyric set to a gentle jangle and its keyboard swell has a slightly darker tone than the previously mentioned tune. His mix of short images and longer set piece lines comes often comes across as performed poetry expressly aimed at song. “Leaving Almost Ready” has some of the same guitar jangle we hear with “Ruins” and the tumble of bottom end despair is sweetened by Jessee’s natural talents as a singer.

“Plastic Bag” opens with a real jewel. “Plastic bag/blowing down evergreen/twisted, floating around/and ending up in a tree/did you lack the courage to talk to me?”  It gets even more incisive from there and the keys provide it with another fine sheen from the first. Jessee really delivers vocally with this song and invokes the haunted quality of another lost relationship in terms few songwriters working today can consistently match. Darren Jessee’s journey through the music world has been a successful one so far, commercially, but there’s no question that this rates as an album truest to himself, circa 2018. The Jane Room 217 is a real achievement.