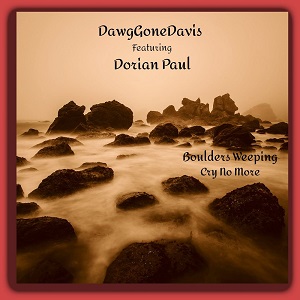 Rebecca “DawgGoneDavis” is sick of crying. She’s sick of seeing innocent lives taken at the hands of gun violence, and existing in a state that’s seemingly so blasé about it. Who could blame her, shootings have been on a more than steady rise over the past decade, and with many higher figures too scared to do anything about it less they are subject to the wrath of gun enthusiast groups, all it feels like we can do sometimes is cry.

But we cry because we hurt and want change, but in this case, change is almost deliberately withheld from us. Davis is a newcomer in music having released a few singles ranging from “Darkest Hour”, “No More”, and “Clean Slate”. All three of those have been incredibly successful and seen her receive airtime globally which is an impressive feat for any artist. Davis has never been one to shy from difficult subject matter and implications, and her work is all the better for it. I’ve listened to a lot of message-driven music, and a lot of it can come across as really clunky, misinformed, or the kind that garners the “well, you tried” response which never feels great. Audiences are more sophisticated, and the bar has been raised significantly as to what we’ll tolerate as far as music conveying themes and messages about current events.

Davis passes the bar with ease via her latest single “Boulders Weeping (Cry No More)” and I think that’s because it doesn’t try to wrap everything in a tidy bow. It’s a messy subject that’s painful that elicits genuine tears from her. Davis has been a passionate anti-gun violence advocate since 2012 with the Sandy Hook tragedy in 2012, and the title of the song is derived specifically from the Boulder Colorado shooting earlier this year. The song has a disarming start with her singing lyrics like “I’m a rock and roller, pushing momma in the stroller”, and even dissecting the false American dream with lines like “We used to be the cure spot, Mayflower proportions, hiding in the garden can’t see through those distortions”. It’s layered wonderfully through the seemingly easing lyrics before that gives way to the abhorrent tragedy we’ve all been dealing with.

Davis is joined by singer Dorian Paul who heavily contributes to the song’s chorus and provides an inspiring levity to the track. We cry now because we feel helpless, but surely there will come a day that we’ve done the difficult work to overcome these issues. That’s the promise that Davis wants to make with this song, even as she knows there’s no specific answer in sight, but it starts with expelling the pain before the focus comes. Plenty of artists both mainstream and indie could take a lesson or two from Davis and her brand of excellent rock/rap and how to best execute songs about difficult situations without neglecting that a song should be entertaining and impactful and I can definitely say with certainty, that this song will stick with me for a very very long time.

The music of DawgGoneDavis has been heard all over the world in partnership with the radio plugging services offered by Musik and Film Radio Promotions Division.  Learn more https://musikandfilm.com