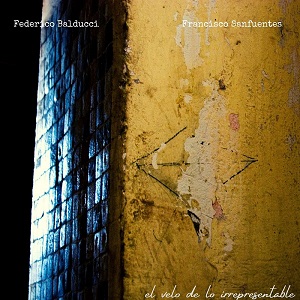 Theatrics are hardly the sole element defining progressive songcraft anymore, and if there’s an artist alive and making credible work today reinforcing this notion, it’s the incomparable Federico Balducci. Balducci’s new collaborative LP with Francisco Javier Sanfuentes, El Velo de Lo Irrepresentable, bridges tracks together via the presence of larger-than-life tones and scattered melodic framework most records suppress in favor of traditional hooks and predictable rhythm. No poppy props are serving as a segue from one piece of this puzzle to the next; this is ambient music born of primitive aural expression, and thus it needs no aesthetical camp to hold a shape.

So much is said without employing traditional lyricism in El Velo de Lo Irrepresentable, and in songs like “Detras Del Muro” and the atonal “Muro VII (I’m Not Organized),” I don’t know that verses could have ever properly captured the weightiness of the music as it’s presented on its own. There’s nothing particularly minimalistic about this LP and its contents, and yet I’m pressed to find a single instance in which Balducci and Sanfuentes overextend the embellishments that ultimately form the melodic fabric of the record. If it were ever debated whether making a heavy sound required a lot of instrumental indulgence in modern ambient music, I don’t think it should be anymore.

This tracklist wasn’t meant to be broken up into individual pieces and consumed, but instead processed as a singular work that starts with “Muro I (The Goal Feels Impossible)” and concludes with “Muro VIII (I’m Not Qualified)” and the aforementioned “Detras Del Muro,” as indicated by the sonic bleeding that precedes the start and conclusion of every song here. There’s an unspoken elegance that somehow tethers the fleeting beauty of the strings in “Muro II (I Don’t Deserve It or I’m Not Worthy)” to the chest-pounding rock of “2+1,” and only after several listens do we start to fully appreciate the continuity the crisp production style provides even the more conflictive material included with El Velo de Lo Irrepresentable.

The warmth that Balducci and Sanfuentes generate as they force blankets of melodic noise into sophisticated combat in “2+1,” the more ambient-specific “Muro VI (People Will Judge Me),” and “Muro IV (I Don’t Want to Embarrass Myself)” is stunningly natural, and it suggests a desire to create simplicity over competing for the spotlight that I’d love to experience more of in the future. These are two players who understand the aesthetics of each other’s artistry, and if it didn’t yield another set of recording sessions post-El Velo de Lo Irrepresentable, I’d be quite surprised as a critic and a fan.

El Velo de Lo Irrepresentable picks up where the last generation of ambient noise experimentalists left off some eight years ago while incorporating contemporary influences many would consider non-canonical to the historical alternative music model, and if you dig provocative content, it’s an album that needs to be near the top of your must-listen list this season. Federico Balducci and Francisco Javier Sanfuentes own the limelight as true disciples of both Masami Akita and vintage musique concrète here, and I believe they deserve a thorough round of applause for the effort put forth in making this awesome new record.

User Rating: Be the first one !
Share
Previous DawgGoneDavis “Boulders Weeping (Cry No More)” (SINGLE)
Next Greye “So Far So Good” (LP)