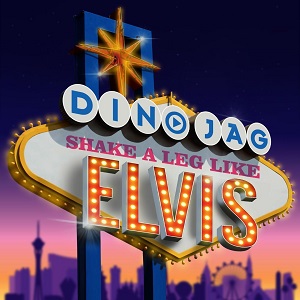 2022 produced some really interesting, guitar-powered adult contemporary pop/rock, and if you were following the underground close to the conclusion of the year, there’s a good chance you heard a little of Dino Jag’s work as it continued to get attention underground. In “Shake a Leg Like Elvis,” Dino Jag submits himself to audiences as an act more focused on tonality than he is on muscularity, with robust melodies leading the way instead of booming basslines and overindulgent sonic frills that have become all too common in pop music nowadays. His efforts prove to be valiant in this track, as he produces what is perhaps best described as one of the more adept hybrids of old-school pop/rock and modern adult contemporary music available to listeners in 2022.

This mix makes the flow of the music so much smoother than it likely would have been otherwise, tying together the jagged edges of a melody without ever disturbing the natural harmonies coming from the strings and vocals. The seamless feel of “Shake a Leg Like Elvis” definitely makes the song sound as passionate as a live performance would, and if my gut is right, it was probably designed with appealing to a crowded concert hall full of people in mind. Dino Jag has the essence of an old troubadour’s repertoire in the tracklist of his latest work, and with regards to embodying the freewheeling spirit of the ancient pop music traditions too many artists have abandoned, “Shake a Leg Like Elvis” might be the best example of his showing respect for the stylistic forerunners that preceded them.

The bass part in this track is seemingly tucked beneath the drums rather neatly, but it still makes a noticeable impression on the chemistry between the vocals and the other elements in the instrumentation. The equalization on the bottom end of this song is heavily scooped, as one would expect to hear in a much more metallic single than this one is, but this doesn’t dismantle the fluidity of the harmonies up top at all – the exact opposite. By scooping out the bass tones here, it makes the verses so much more physical and in sync with the lead guitar, allowing us to embrace the surreal textures of the instrumentation while never losing sight of the lyrical narrative being presented by the chilling voice beneath the fuzz.

Dino Jag came out of total obscurity in 2022 to become one of the more intriguing acts in his scene, and after listening to this latest single from his moniker, I’m very eager to hear what he’s going to develop in the studio next. He’s in a very experimental phase of his sound, but with a bit more compositional discipline and harmonies as powerful as those heard in “Shake a Leg Like Elvis,” he’s going to get all of the fame and fortune he so richly deserves. There aren’t very many pop or adult contemporary groups straddling the line between genres with as much ease as this player is, but even if there were, his sound would still stand out as a rare treat audiences should seek out this month.

Share
Previous Universal Dice “Last Prayer” and “Out of Many, One” (SINGLES)
Next Rob Alexander “Merry Christmas in Heaven” (SINGLE)