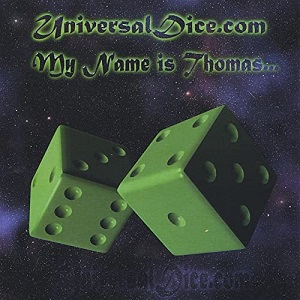 Universal Dice “Last Prayer” and “Out of Many, One” (SINGLES)

The world was a different place five years ago. Can you even remember how it was twenty-five years ago? It was different and yet… mostly the same. Except for the parts that were super different, right? For acclaimed band Universal Dice, they were just getting their start with their debut album My Name Is Thomas…, a one-of-a-kind rock opera album full of intense ballads, impressive instrumentals and vocals, and way more charisma than a first-time album ought to have.

It was an impressive start and the past twenty-five years have only showcased their talents even more. Hitting twenty-five years as a band is a big deal, however, and Universal Dice wanted to do something to acknowledge and celebrate their growth as artists and their wealth of previous releases, which is why they’re coming out with two new masters of previously-released tracks “Last Prayer” and “Out of Many, One.”

“Last Prayer,” off of the aforementioned My Name Is Thomas… sees the band tackling religion and the thorns that come with it; the new master is a sleek remodel of a classic track that fans love, and there’s only more to love with the musical facelift. The song’s immortal message rings true, and the production has only improved in scope and quality since its original release in 1997. “Out of Many, One” is a song from a little later in the band’s lifespan but it still comes in at about twenty years old — the anti-war protest song was written in response to the American-Iraq conflict and its lack of information in regards to most American citizens. The ageless factor of this song feels as relevant now as it did in 2004, too, and it’s no wonder these two tracks are finding new life in the remasters and re-releases.

Universal Dice is remastering the tracks in preparation for their upcoming new album Misfit Memoirs, due out in early 2023, but the excuse to celebrate a quarter century around the sun as a band is as good an excuse as any other; the way the band’s songs feel relevant despite the release year is a powerful message, and the songs will assuredly find new life with the touched-up versions of themselves hitting streaming services. The concept of remastering entire albums could be an idea worth pursuing, but it’s a lot of work and the band is more than likely waiting to see how these singles perform before they chase a full album’s worth of remasters.

“Last Prayer” and “Out Of Many, One” are stellar tracks to return to, or they’re great tracks to start you out on your journey when it comes to Universal Dice. There’s plenty of time to use them as leaping-in points for whatever’s on the horizon, and revisiting past albums has never sounded so good (literally)! For now, fans will be satisfied regardless of the era, as these songs have gone to prove that good music is timeless and great production can always be tweaked and made better. Universal Dice is proving that a great band can always have a lasting impression, no matter the year, technology, or mastering quality.