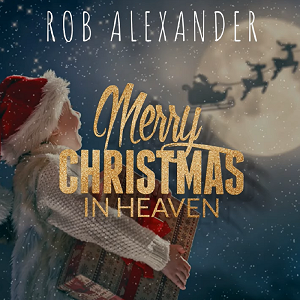 Rob Alexander has already established himself as a go-to medical mind and all-around knowledgeable pillar in the south Florida indie pop/rock community and in his new single “Merry Christmas in Heaven,” he adds the title of intriguing holiday composer to a growing list of talents few can compete with. Although geared towards a young audience specifically, “Merry Christmas in Heaven” has a thoughtful pop structure that shows off what kind of a musician Alexander is. He isn’t throwing anything together in this piece but instead giving it the same level of dedication he would the practice of healing he has conquered so epically in the past few years.

The vocal here isn’t forced but instead layered into a jovial mix that puts instrumentation on the same level as the verses, which honestly helps the song to sound a lot more full-bodied than it would have otherwise. There was a risk of this arrangement sounding a little overwhelming, given how fiercely the beat pushes through the melodic elements in the track, but the lead vocal breaks that up with an innocence that only adds to the vibe of the lyrics rather than presenting something independent in the big picture. He might be a physician primarily, but Rob Alexander is as good at making detail-oriented songcraft as he is putting words on paper.

This groove follows the melody rather than the other way around, and I think this is one of the main reasons why “Merry Christmas in Heaven” feels as catchy as it does. We’re not just listening to a smart beat and some cute lyrics, but instead a track that feels like it swings with us rather than just nudging us towards a rhythm. Immersive songwriting is something that takes years to master, but it would appear that Alexander has a good feel for it in this particular performance.

The spacing between the drums and the other melodic parts here is excellent but not over the top, which is important for us to appreciate just how much is going on behind the lead vocal. There are intricacies to this single that I don’t normally expect to hear out of a Christmas song, or any other track to be fair, but they don’t translate as compounded or condensed to make a smooth release here at all. This is a complete single, and not just in the realm of seasonal soundtracks, either.

I was not anticipating being as impressed with this effort as I am, and I think Rob Alexander deserves a lot of credit for this seamless foray into music. He doesn’t give me the impression that he’s moonlighting here but instead putting as much of a personal investment into this work as he does his typical gig. “Merry Christmas in Heaven” isn’t lacking in wit or whimsy, but don’t be deceived by its light cosmetic appeal; beneath the surface lies a well-crafted piece of music by an artist who is probably going to see more demand for content like this before 2022 is over.