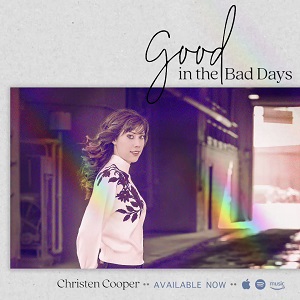 Rising country star Christen Cooper has never been one to stay in one place too long as far as her sound as a musician is concerned.

Starting her musical career at the age of ten and presently having crafted over four hundred tracks while working with Nashville producers, the very idea of idle hands must make her head spin; Cooper is an artist out for musical vengeance with the way she’s consistently crafting songs, and the fact that her musical output is great just goes to show that some people are just born to compose (while others are born to listen and write reviews of it.) Her third single this year, “Good in the Bad Days,” comes hot off the presses as an optimistic piano ballad all about the art of the silver lining — fans will certainly remember her last single, pop country rock track That Kind of Guy,” and the direction she’s taking here is a little bit different. (And by a little, we mean a lot. Hold on to your hats!)

“Good in the Bad Days” ditches the guitar and drums altogether, positioning the track as something far more independent from the rest of the Christen Cooper catalog at large. Optioning instead to focus on Cooper’s voice and piano, the single veers off-course from all expectations and gives listeners something they might have been craving without ever knowing the feeling.

The warm piano blends together with Cooper’s vocals, and the production of her voice is crisp and front and center without ever overpowering the rest of the song’s composition. The track is a mature step forward for Cooper’s songwriting, as she almost seems to step back from the process and write for a force larger than herself. The lyrics are undeniably personal, but with world events the way they are, the song will undeniably hit anyone who listens with a blast of cold, relatable air to the face.

The balancing act of crafting a track that speaks for itself, its writer, and its listeners is a task not suited for everyone. Even disregarding the fact that writing any song at all is hard work, writing one that has a shot at reaching anyone at all is fairly difficult. To speak for yourself and others is a tall ask, but Cooper seems more than up for the challenge as she cracks her knuckles and gets to work — those four hundred songs didn’t write themselves, and she’s not showing any signs of slowing. Whether it be by country-rock track or piano ballad, the presence of Christen Cooper only seems to be growing heavier as days progress — from her expanding TikTok presence to her constantly-maturing songwriting process, there’s nothing the girl can’t do.

The possibility of seeing an album full of songs as poignant as “Good in the Bad Days” is a possibility worth holding onto, and seeing where Cooper goes next is a certainty that remains just as exciting. Be it a polka/hip-hop dance track or a hair metal revival by way of psychedelic Welsh sitars, Christen Cooper is the girl for the job. It’ll probably stay country, but if it ain’t broke…