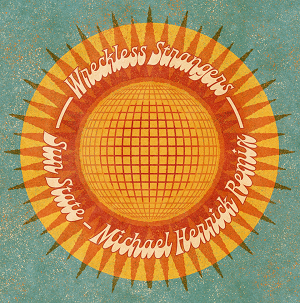 With a heady rumble behind its beat, Wreckless Strangers’ “Sun State – Michael Herrick Remix” gets off with a bang and only swells in size and strength as we press on. The synths are as big as ocean tidal waves, and yet there’s something gentle about the melody they’re emitting in this mix. The bassline seems intent on slinking around in the backdrop, quietly releasing a menacing scowl only noticeable when isolating the backend from the rest of the song. A lush lead vocal ties everything together beautifully, but the poetry contained within its statements isn’t the main source of narrative in this piece. Rather, the rhythm of the music – and every freeing groove it sports – are the real bread and butter of this performance.

The percussive beat in “Sun State – Michael Herrick Remix” is so relentless as we work our way into the midsection of the track that there are a few instances in which it feels like the bottom end, starting with the bass, is going to erupt right out of the speakers and come spilling into the room around us. This never happens, but the sensation of teasing us with the possibility of a violent sonic intervention pushes me to the edge of my seat every time I hear this single. Wreckless Strangers pull out all of the stops to make this remix even better than the material it was adapted from in the first place, and if that’s not worthy of some critical acclaim, I don’t know what possibly would be.

Although there’s a sterling pop hook included in this track, it’s not the main focus point, nor the element of catharsis that listeners are left in pursuit of from the moment we press the play button forward. Instead of centering everything on the typical flash point of excitement, Wreckless Strangers wanted this single to be about the journey – not the destination. The adventurousness of “Sun State” is never culled in the name of crossing some sort of compositional finish line, and this lack of creative pressure affords the act a tremendous amount of leeway to do as they please in reimagining the song in an entirely different light than they would have in any other scenario, in-studio or otherwise.

I’m normally one of the tougher critics to please when it comes to EDM and any kind of electronica made contemporarily, but something like Wreckless Strangers’ “Sun State – Michael Herrick Remix” appeals more to my sensibilities as a fan of quality music than it does anything else. This is a rebellious look, yes, for any artist within the genre to be boasting at this point in 2022, but for listeners who aren’t into acts that play by the rules from one day to the next without ever shaking things up for the better, Wreckless Strangers’ is a style that you aren’t likely to find competition for any time soon. They’ve got my endorsement, and judging from the overall response their new work is getting, they appear to have got that of their native Bay Area scene as well.