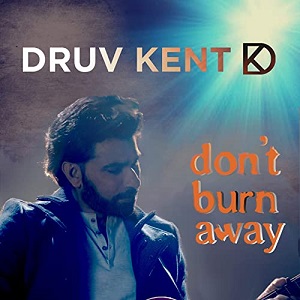 “Don’t Burn Away” is the new single from Druv Kent. The singer/songwriter flawlessly delivers a light rock/pop offering. Written as a response to Mother Earth’s fragility and the ecological crisis, Kent is a financer turned musician – and it all adds up an incredibly moving track. He stirs the listener with an intricate guitar bed and his commanding voice. The depth of his song, strikes a heart-piercing joy. A fetching voice, a man who was born to sing, Kent brings his own powerful emotions to the interesting eco-sonic-system he’s created.

By light that’s in your soul, don’t let it burn away, don’t let it burn, Kent sings. His voice, warm but possessing remnants of a raspy voice, making his crooning all the more interesting. I will not rest, he continues. As a listener you feel that promise, it’s a tangible commitment coming from his voice. The evocative acoustic guitar, refreshingly organic. It tumbles along, like a story being woven into a tapestry. Kent, whose own story involves a career change, never lets on to the listener, that he isn’t in full control of his artistry. He’s a natural. He emits such love and the way the song flows, it feels like a warm, sunshine burst. The guitar work is lush, almost effervescent.

Kent’s (at times) swooping voice reminds me a little bit of Josh Groban, but he’s much more organic. I felt like he’s more approachable, more authentic. The overall mood is very loving, very lofty. The impassioned Kent communicates a song that is close to his heart, and does a great job of bringing to light the immediacy of global warning.  I lingered for hours into the impact of his voice – a convergence of rock, soul, folk and pop. He invites a wave of honor, a feeling of respect and love. I wondered aloud, too, why it’s so easy for him to sing with such grace, when there is such a pressing need for global change. I think he conveys his message the only way he can – with true love from his soul. This song really inspires and it’s quite catchy, too. He creates a river of truths, a bed of honest emotions. I think he’s really scared for the planet and he honors it by singing this song.

If you’re a fan of the songs “Planet Roaring” (Duran Duran), “Conviction of the Heart” (Kenny Loggins) or The Eagles’ “The Last Resort”, then this song will spring a new spirit within your soul. For people that might not think this is a problem or turn a blind eye, this is the song that harnesses the power of music and messaging.

Kent records his music in both English and Hindi. In a relatively short time, he’s amassed 13 releases. These include “Bit At A Time”, “Higher Ground”, “Till We Meet Again”, “Back Home”, “Glitter & Dynamite” and “I’m Still Riding”. His 2019 Hindi hit “Hindustan Meri Jaan” was voted as the Top 10 Hindi patriotic songs ever. “Don’t Burn Away” is the first of five singles from his forthcoming EP.

The music of Druv Kent has been heard all over the world in partnership with the radio plugging services offered by Musik and Film Radio Promotions Division.  Learn more https://musikandfilm.com