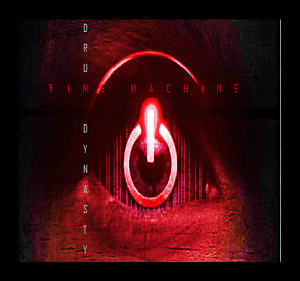 They say everything human is finite and there is nothing new under the sun. Others say we live in an exhausted world; genuine inspiration, individual creativity, and a willingness to push the envelope are scant and, instead, it’s everyone for themselves, man the lifeboats, the end is nigh. It is not true, however. There are still idiosyncratic and iconoclastic artistic forces working along the edges of the modern music scene. Commercialism has marginalized their profitability, but a robust bank balance isn’t the only measure of wealth. Drum Dynasty’s third release Time Machine doesn’t always find its intended mark, but it brims with genuine inspiration, the willingness to push the envelope, and an expansive imagination. The twenty tracks included on Time Machine re-envisions the possibilities of music and sound within a compositional context and, despite an obvious frame of reference, it never imitates another artist.

“Countdown” is an ideal opener for this album. Executive Producer Cyrus Rhodes, ambient composer Michael Carroll, and Seven Against Thebes drummer Bruce Burgess intend this track to provide a memorable and pertinent introduction for the nineteen recordings that follow and it rates as a spectacular success in this regard. Their approach to progressive music keeps one foot in mainstream structure while pursuing a much different texture than found in popular songcraft. Carroll’s ambient touches are evident throughout this piece.

The conceptual trappings surrounding this collection are impossible to miss. It does not tell a linear “story”, by any meanings, but there are unifying sonic themes recurring during Time Machine. The suggestion of such conceptual elements gives the recording added gravitas as a musical statement. Burgess’ drumming chops are outstanding. There doesn’t appear to be any style he struggles with; his transitions from one time signature to another never miss a beat and balance metronomic precision with ample “feel”. His talent for accenting the ever elusive spirit of inspiration through his drumming distinguishes him from many percussionists and skin beaters alike.

“Supernova” is an evocative track running a little under three minutes. You can split the cut into two distinctive halves. Synthesizers weave a ghostly tapestry of sound with intermittent percussion dropping in. Burgess’ presence expands as the track progresses and treats listeners to the polyrhythmic showcase of his skills. There is something monumental girding the track “Electric Eye”, it embodies a great power thriving in the frozen void of space, and the production captures every nuance of the composition. There is nothing fly by the seat of your pants about these instrumentals; they expertly straddle the line between freewheeling spontaneity and careful planning.

The tracks during the second half of Time Machine are longer than the first part. The ambient music for “Signs of Life” has a much brighter character than “Electric Eye” and its classical inclinations are apparent to any attentive listener. The title track “Time Machine” is one of the longer compositions recorded for this release and kicks off with Burgess laying down a physical and hard-charging rhythm. He varies his trajectory in creative ways, mixing things up, and Carroll’s tasteful synthesizer touches in the background embellish the recording well.

The album’s longest song, “Black Hole”, opens with a great deal of energy and dominated by a bevy of computerized and synthesizer generated lines. This initial movement reaches a climax of sorts before Burgess and company revamp their ideas in a different direction and the drumming becomes more prominent. “Pale Blue Dot” draws its title from Carl Sagan’s famous remark about Earth and concludes the album on a high and ultimately hopeful note. It is an elegiac conclusion to the release, relaxed yet confident, and the guitar playing finds the right touch for the song’s needs. Drum Dynasty’s Time Machine is a worthwhile release for those who enjoy thoughtful progressive music lacking any pretensions.