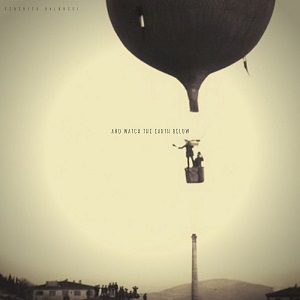 Federico Balducci – “And watch the earth below (Cadet Chronicles I)” (LP)

In recent years, ambient music has seen a major uptick in popularity amongst indie musicians. Be it artists recognizing the fact that their audiences are in dire need of study music or counter-programming against their contemporary peers’ more straightforward fare, indie production has grown exponentially to create music far more experimental than what might have been previously accessible. What some might not realize, however, is that ambient music has core origins that date back to the early 20th century with French composer Erik Satie’s labeling of music created solely for dinner parties as “furniture music.” Famed producer/musician Brian Eno eventually coined the genre with the term “ambient music” in the mid-1970s, but the modern invention most might associate with the genre is ill-conceived. Recent ambient acts have included Aphex Twin, Oneohtrix Point Never, and even Sufjan Stevens (most well-known for his ornate symphonic melodies and banjos.) The genre has continued to grow with a ferocious speed akin to that of this next act’s release schedule.

Federico Balducci is far from a novice when it comes to releasing his music. Hailing from Boston, Massachusetts, Balducci has nearly ten dozen albums decorating his Bandcamp’s discography, which is… remarkable, to say the absolute least. Even more remarkable is the fact that the page weaves in and out of a variety of languages with Balducci touting English, French, and Spanish within his song and album titles – throw in the fact that he’s been able to make over one hundred separate and unique pieces with an emphasis and focus on ambient music, and you’ll soon begin to realize that Balducci’s resume is wildly impressive.

With his latest release And Watch the Earth Below (Cadet Chronicles I), Balducci embarks on a new saga throughout eight songs that all touch on a variety of sounds within its forty-minute runtime. The misconception from outsiders towards ambient and experimental music is that it runs the risk of suffering from same-sound syndrome but naysayers will surely reconsider their tone-deaf assumptions after spending time within the art of Federico Balducci.

The album works best as a front-to-back experience, and picking standout tracks seems to ultimately miss the point And Watch the Earth Below is attempting to make both within its conception and genre, but I would be remiss to go without at least promoting “That One Day, We Will Fly” and “What Is and What Is Not” to people who don’t know whether or not they can get down with an entire ambient LP. These two particular tracks encapsulate the overall mood and talent on the record and, while they won’t function as standalone pieces, might be the best stab at singles one can get from the experimental genre. Overall, Balducci must be aware of the skill and craft he puts on display within his projects this deep into his career – And Watch the Earth Below is a spectacular addition to the genre of ambient experimental space jazz, and the prospect of Cadet Chronicles II is something well worth anticipating.