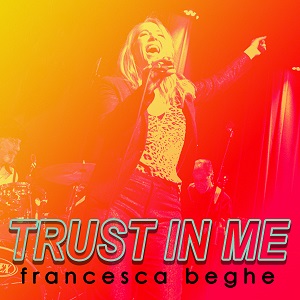 Francesca Beghe “Trust In Me” (SINGLE)

Francesca Beghe offers the world her version of “Trust In Me” nearly 30 years after its release. “Trust In me” was famously performed by Joe Cocker and Sass Jordan on 1992’s The Bodyguard soundtrack. To this day, The Bodyguard soundtrack is the best-selling film soundtrack of all time. Beghe who cowrote the song with Charlie Midnight and Marc Swerksy over 30 years ago,  performs the track on her upcoming album Francesca Beghe Live. Beghe’s rendition of “Trust In Me” is the blues meets the power of rock-n-roll. Beghe’s incredible vocal power shines on “Trust In Me,” an effortless endeavor for Beghe.

Although Beghe’s version of “Trust In Me” was recorded live it sounds like you’re listening to the studio recording. That’s how impressive her and her band’s performance is. Beghe’s band is made up of seven friends of hers, who have worked with some of the greatest musicians that have walked the earth. Although there are seven members onstage, you’d never be able to tell by the amount of unity that they’re achieving. The magic Beghe and her band achieved was due to the singular sound they were able to find. After over 20 years since singing with a full band, Beghe’s return is a true force of musical nature.

“Trust In Me” effortlessly genre bends with its blues like beginning and its rock-n-roll chorus. Beghe’s version feels like what we should’ve been listening to all along. Although this song was famously recorded by Joe Cocker, Beghe’s version feels like its a whole different experience. Beghe is able to maintain her own sound and identity, bringing “Trust In Me” to another level. Beghe’s vocals are familiar, comfortable, and effortless. What stands out so prominently is Beghe’s joy for singing. You can feel how much she loves it through her carefree belts and her cheeky chuckle she makes as the crowd is cheering. That’s the same moment where you’ll remember that the song is live and you’ll not believe it.

Beghe is a New York based artist who got her start singing and performing in the vivacious 1980’s club scene. An early rendition of “Trust In Me” got Beghe a solo record deal, which tells me Beghe was always meant to sing this song. Its rare that a song conveys a carefree sense of timelessness,“Trust Me In” brought me back to my childhood and future hopes. I could see it scoring future happenings of mine and long lost memories. There is an inherent liveliness to “Trust In Me” that is reminiscent of Bruce Springsteen. This is a celebrated song that celebrates the magic of life and music. Beghe and her band honor it by delivering a masterful version that is fully felt in its raw form.

Francesca’s Beghe’s absence was worth the wait. “Trust In Me” shows off Beghe’s vocal skills while revitalizing a classic song. I commend Beghe for maintaining her artistic identity while performing live.”Trust In Me” is an instant hit for Beghe and no doubt a highlight off of Francesca Beghe Live. Don’t miss “Trust In Me” dropping March Fourth!