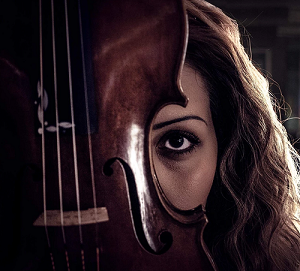 Bringing the feeling and concept of redemption to life in musical form seems like a tall order. It isn’t a common theme like love or hate which lends itself to clearer interpretation. Instead, redemption is as subjective as it comes, doesn’t immediately suggest particular sounds or structures, and seems like a lofty goal at best. Bernadett’s new release accepts that challenge and will surprise newcomers.

This title song from the Hungarian-born violinist’s release doesn’t re-invent the musical wheel. Bernadett, whatever stylistic shifts she’s responsible for with this track, essentially adheres to a recognizable design that doesn’t drag listeners too far outside their comfort zone. She inspires listener’s confidence she knows what she is doing and it’s a talent woven into her DNA and honed by a childhood and teenage years dedicated to sharpening her craft.

Her inherent skills are fully displayed during the title song. It opens with a short snippet of  inviting glide with the needed musicality to carry listeners into another dimension. I measure the quality of an artist by many metrics, but one of the most important is their ability to cast a spell over me. Please shut the world out for a while and take me into your imagination because I suspect we’ll be safe there – at least for a time.

Bernadett’s musical imagination is a passionate and brilliantly alive place. The well-rounded musical arrangement for the first song isn’t complicated, there’s no virtuosic leaps required, but it isn’t treated as an afterthought either. There’s been obvious work done to tailor the arrangement and Bernadett’s violin as close as possible to make for a more coherent and overall impactful song.

There’s an almost rock and roll spirit in the title song. “Redemption” has a rambunctious, head-down and straight ahead charge that carries listeners away without ever getting sloppy. Bernadett’s compositional skills are exquisitely precise; nothing is left to chance here and there isn’t an ounce of fat anywhere.

It may read cliché to some, but her violin is an extension of her body. The title song is the sound of a musical artist going for broke, never backing up an inch, and ready to put herself front and center in an effort to connect. It is a resounding victory. Its power lies in its melody, even better than the first track, and the light atmospheric feel putting a bow on it all. It never feels or sounds false though.

“Redemption” never sounds strained or fabricated. It achieves a meaningful artistic statement that’s surprisingly weighty despite its short length. Bernadett is here to stay, as the saying usually goes, and we’re enjoying the first salvos in a career destined to touch many lives and endure for countless years to come. She will leave a mark on the music world, just like her grandfather, and music lovers will remember her name long after she’s shuffled off this mortal coil. Get in on this rocket ride while it’s still close to the ground because the sights we’ll see are likely to be incredible.