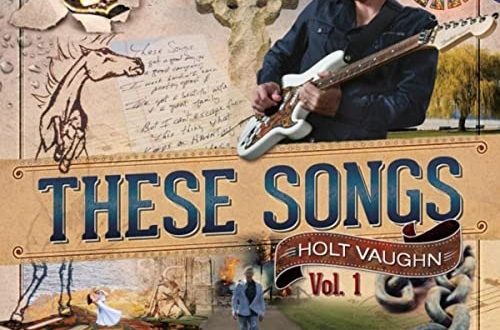 Singer/songwriter Holt Vaughn’s latest release These Songs, Vol. 1 features a dozen songs. Half of these tracks are highlighted by contributions with some of the best vocal and instrumental talents working today. It’s as impossible to categorize their specific contributions to each song as it is to slap a label on These Songs as a whole, but the album’s diversity is among its key strengths.

It also reflects Vaughn’s musical and, less overly, personal journey. He’s a long way from the wild-maned and Gibson Les Paul Sunburst clad budding star of years gone by. Vaughn’s gradual transformation into the important artist of today doesn’t come at the expense of his energy. Each of These Songs’ 12 tracks is full of urgency and a genuine enthusiasm for living that cut through even its thorniest moments.

He kicks things off with the title song. “These Songs” is an engaging romp from the outset, its blues roots shining through, but there’s much more going on here beyond an Americana laced blues pastiche. Many listeners will enjoy the deceptive ramshackle quality of the song’s rhythm section. It contributes to the song’s loose confidence and Vaughn’s voice, inviting yet raucous, is the song’s crowning touch.

His spiritual beliefs and convictions rise to the surface with the second song. “Woman of Light” is the first track with guest contributions and Will McFarlane’s guitar playing certainly constitutes a star turn. He doesn’t attempt bamboozling the other players and hogging the spotlight for himself, make no mistake, but McFarlane’s stinging lead guitar punctuates this poetic tune in a way few other things could.

Vaughn’s poetic talents are clear during “Sparkle in Your Eye”. Two new guests, legendary Glass Harp guitarist Phil Keaggy and Rick Cua, play a crucial role in this song achieving such success. There’s ample nuance and personal belief layered through the lyric, as well as attention-grabbing imagery, but Keaggy’s playing raises everything several notches. Cua’s effect on the song is less overt though nonetheless powerful. Keaggy returns on the very next cut with more outstanding guitar work on the instrumental “Bitter Suite”.

McFarlane returns, as well, with the track “Tulsa, Oklahoma”. Vaughn’s debt to the blues is stronger than ever here as he goes so far as adopting its traditional three-line verse structure. Attentive listeners familiar with blues will notice, however, how Vaughn elongates the structure without ever diluting its bluesy flavor. Vaughn benefits a final time from Keaggy and Cua’s contributions on the track “David Song”, but it springs surprises.

The second half of the track relies a great deal on outright hard rock electric guitar. Vaughn’s voice proves more than capable of matching the aural intensity without ever slipping into hysterics or crass histrionics. It’s the album’s longest track, clocking in at nearly seven minutes, though it never feels exhaustive. It testifies to Holt Vaughn’s talents that even the material with spiritual themes never wearies. There’s no sermonizing, no heavy-handed nonsense draining the listening experience of fun – he is aware, at every turn, that his songs must entertain as well as elevate. Holt Vaughn’s latest album These Songs, Vol. 1 clears that hurdle with plenty of room to spare.