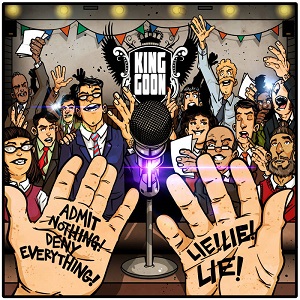 Admit Nothing! Deny Everything! Lie! Lie! Lie! The debut album by Brit Ska rockers, King Goon, is a work that is 7 years in the making. The founder of King Goon, Joel Morgan, had amassed a collection of demos that he planned to use for multiple projects. That idea proved to be somewhat impractical, and they were instead given to what would become, King Goon. King Goon’s sound is certainly not limited to Ska influences on this record. In fact, there are so many genres present, in varying dosages, that their sound is almost impossible to describe. But of course, the presence of horn instruments and punk energy will have them conveniently labeled as Ska.

On “Gambling Fool,” we get our introductory piece to King Goon, and it’s both busy and minimalistic. The galloping guitars and White Stripes style breakdowns make this one a fun opener. “Realpolitik” is in your face from the first note, and opens with album the title as the first lyric. The band really leans into their punk roots on this one to get something of a Clash vibe. It’s hard to tell if this one is meant to be ironic, or if the band actually intends to make any sort of a statement, here.

“Just Whose Side Are You On,” sees the band slow things down and really go for melody. The bass is quite pronounced, here , as we get an uncharacteristically delicate intro. The vocals are layered in a way that feels like a slow speed rollercoaster loop. The alliteratively titled, “Tops Off Real Fighting,” sounds like a well written buffet of nonsense. This one has strong overtones of American Punk, in particular, The Lawrence Arms.

The defiant “Beauts And Consequences” is drenched in matter of factoid rebukes, and even a few well thought out threats. “You don’t scare me” is heavily repeated throughout the piece, to the point that it becomes quite catchy. There are some clever lyrics and some vulgar British slang words sprinkled in, in case whomever is supposed to get the message, isn’t doing so. Overall, the lads give it all they have for this performance, and you can feel it. “Beauts And Consequences” stands out as being a soft of crescendo and a contrast to the album’s more cerebral energy to this point.

King Goon has made a powerful impression with Admit Nothing….their debut record. There is no other band that sounds exactly like this, and more importantly FEELS like King Goon. Yes, there are prevailing elements of certain genres and specific influences, but this record has amalgamated to become a once in a lifetime work. It’s not perfect, but the musicianship and the sense of dynamic unpredictability make it a can’t miss prospect. Deep down, King Goon realizes what they have achieved here, but probably not the full scope of what they are capable of, just yet. Besides, even if they were fully aware, they would deny it anyways.