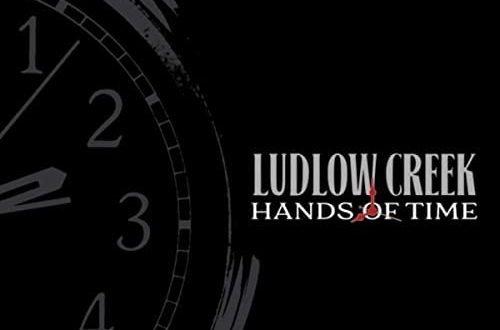 Dayton, Ohio’s Ludlow Creek emerged out of a long-standing cover band named Southbound and deep friendship binding together its five members. Each member is a singer and multi-instrumentalist which means, if nothing else, that their musical potential is more or less boundless. The band experienced considerable success as Southbound, eventually writing and recording their own material, but they opted for a change in direction before releasing their second collection.

Ludlow Creek’s debut Hands of Time puts the band’s modern take on classic rock in the best possible light. The eight song collection opens with the boisterous “Instant Replay”, its central riff echoing countless past rock classics, and fans of the style will immediately feel at home with Ludlow Creek. Their twin guitar attack never overwhelms listeners because Allen Seals and Dave Benson focus on melody first and foremost.

“Nine Mile Road” maintains the same brisk pace as the opener and draws from the same tradition. He varies this song’s direction, however, with the melodic flourishes built into the arrangement. It’s gratifying to note how well Ludlow Creek balances dedication to authenticity with a clear pop sensibility. They never lean too far in one particular direction. The band’s vocal chops shine bright during the classic country balladry of “When I’m With You”, but it’s impossible to not admire their facility with dynamics. The emotional note they strike is spot on – there’s never any inclination the song will slip in melodrama.

Ludlow Creek continues tempering the album’s pace with the mid-tempo title song. The arrangement is more diverse than the earlier tracks, the verses show this when the band steps back and allows the vocals to come to the fore. The potentially portentous title doesn’t drag down a thoughtful, intelligent song – it’s an inarguable high point so far. Michelle Scarpelli’s various keyboards are an underrated weapon in the band’s arsenal and the slow burn organ glowing in the “background” supplies the song with ample color.

“Picking Up the Pieces” is another vocal highlight. It provides an involving platform for each of the five voices to make their presence felt without ever surrendering its organic quality. It crackles with charisma despite its subject matter. Ludlow Creek’s skill for sweetening melancholy themes with affable musical motifs makes for better listening. Turning the songwriting away from the sinewy rock guitar of earlier songs in favor of acoustic comes at an excellent time in the running order.

You find cohesiveness there as well. Ludlow Creek understands the dying art of track listing as evidenced by Hands of Time’s gradual evolution. Following “Picking Up the Pieces” with the post-modern Eagles nod “She’s My Baby” underlines the sensitive and rambunctious live comfortably side by side in this band. The closer “Freedom Blues” is perhaps more musically ambitious than you might expect; segueing from the much rowdier first half into its second part provides considerable kick. It places an audacious exclamation point on this traditional release and points the way towards a future brighter with promise than ever before.