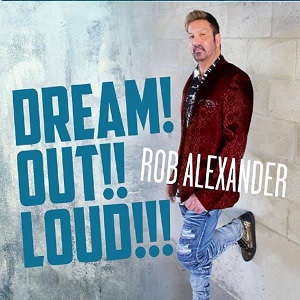 Between the synth, the keys, the guitar strings, and even the sleekly-appointed bassline, there’s an argument to be made that the new single “Yesterday’s News” is the most instrumentally complicated song of Rob Alexander’s career to date, but I don’t think that’s the full story on this track. Contrarily, while it might be quite the stacked composition in terms of how it’s been arranged for studio performance, what it showcases in our leading man, and especially his abilities as a vocalist, is really all the more sublime.

Instead of putting forth an intimate, muted performance centering on his crooning exclusively, Alexander is surrounding himself with a wall of sound in this piece that pushes him to go a little harder at the hook than he normally would, as if to tell us that he knows he can get just a bit more connected with the medium than he’s ever been before. He’s got everything riding on this hook, or at least it would seem so from his ambitious attack, and while there’s less surface-level bombast with regards to his harmonies, his execution in this pressurized groove is something to marvel at all on its own.

When Alexander is harmonizing with an element of the instrumentation, he delivers something clandestine and simple as opposed to frilly and embracive of surreal undertones, much as the majority of the songs in Dream Out Loud would. He’s got less to kick at from behind the microphone; he wants us to get lost in the storm of the music with him, rather than witnessing his journey from the audience.

The beat is by far the biggest element in the mix besides the vocal when it comes to setting the emotional stage for these lyrics, and I love that it isn’t just the drums driving the rhythm but the collective force of the band and even Rob Alexander’s singing. This feels like a collaborative effort for sure, and the straightforward attitude this leading man has only fosters a greater sense of chemistry between all of the players in this single. I want to see how “Yesterday’s News” plays out live, and I doubt I’m the only one.

I really love Dream Out Loud as a statement piece for what this artist has been trying to assemble from a compositional point of view for a few years now, and this all-new supportive single is reason enough to check out the complete tracklist. “Yesterday’s News” brings together all of the best parts of Dream Out Loud without having to minimize any of the larger-than-life aesthetics that give the record some of its most stirring – and surprisingly emotional – moments. Rob Alexander has come a long way through the years, and if we’re to go off of what he’s putting out at this stage of his career when predicting what the road ahead still has in store, I think that his experimental phase is only going to get more provocative and incendiary as time goes by.