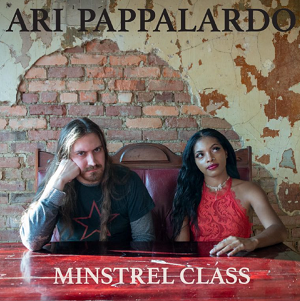 Ari Pappalardo is living his life on his terms – he brokers no compromises. One clue of that is in the title of his latest album, Minstrel Class. It’s a title fueled with self-identification rather than some two-word throwaway and places Pappalardo in a long tradition of iconoclasts who reject mainstream art with its willingness to meet the audience more than halfway. Pappalardo, instead, refuses to dilute his ambitions, follows his own vision, and hopes we accompany him for the ride.

There’s no question Minstrel Class provides quite a ride. One aspect, if nothing else, of the opener “Where is the Line” will leap out at listeners – the variety of different “voices” Pappalardo can conjure for any given song. It isn’t often a singer shows us so far convincing “faces” while maintaining artistic control over the song, but “Where is the Line” makes it sound easy. A plethora of influences percolates throughout the track, as well, without it ever feeling cluttered or overcooked.

“Gone N Dunnit” has infectious energy. Few listeners will dislike the way Pappalardo alternates between a crackling simmer and brief bursts of intensity; it generates dynamics you would normally find in a rock song. Placing it in this sort of setting makes for a more compelling listening experience and Pappalardo’s vocal complements it well without drawing too much attention to itself.

Much of Pappalardo’s music is uncategorizable. The improbably titled “James” is a loose yet coherent union of various styles such as rock and jazz, among others, and ranging from echoes to fully realized threads. Listeners won’t think they are in alien territory. There’s much that’s recognizable about this track, but Pappalardo phrases its movement in idiosyncratic fashion that he accomplishes something else entirely – he creates something new, all his own.

It isn’t facile stylishness either. “Halo” achieves a similar effect mixing straightforward singer/songwriter fare driven by acoustic guitar with ethereal harmony vocals and light synth. The pop sensibilities present in songs such as this are undeniable. It never dilutes Pappalardo’s seriousness of intent, however, but sweetening the deceptive simplicity of his lyrics is shrewd. The mini symphony of voices he offers during “Blush” is another of Minstrel Class’ high points and exudes unique energy; it’s a busy and lively approach without ever sounding cluttered. It’s another example of his rare talent for working in a highly stylized yet authentic vein.

Another hybrid comes our way with the song “That’s Not How You Love”. It begins as a rueful quasi-ballad. Pappalardo transforms the song multiple times, however, evolving its musical trajectory alongside its emotional arc. His lead vocal follows a similar path. It may be beating a bit on a dead horse, but beyond his personalized take on time-tested forms, it’s just as impressive how he sounds so off the cuff and easy about it. There’s no apparent strain in this song or any others. They sound as if they sprung from him full born.

“London Fog” has near orchestral grandeur from the beginning. Ari Pappalardo sweeps away any doubts about whether his voice can flourish in such a musical environment from the outset. His lyrics are in a long tradition, looking back on lost or failed love, but his ability to phrase his sentiments in an individual way shines again. His album Minstrel Class may catch you off-guard as we rarely get the opportunity to hear such inspired releases these days. It’s cut from a different cloth than most.