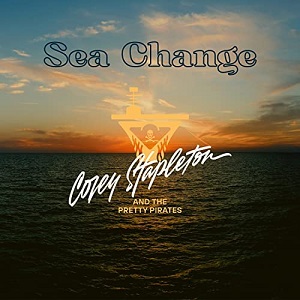 Corey Stapleton and The Pretty Pirates chronicle the benefits of personal growth and transformation on their debut album, Sea Change. Throughout 12 tracks Stapleton explores the divisive nature of America and how following your heart takes more courage than you ever thought it would. Sea Change navigates these delicate subjects through Stapleton’s personal experiences and with grace. Set to a fusion of classic country rhythms and country-pop melodies, Corey Stapleton and The Pretty Pirates carve themselves a spot in the modern country music scene. Sea Change is an exciting and extremely heartfelt album about self-discovery, a subject that is often overlooked. Stapleton further subverts the country genre by drawing positive conclusions from his experiences, both good and bad.

With songs like “The Pen” and “The Darkest Part,” Stapleton sings about the benefits of something falling apart. It may sound counterintuitive but “The Pen” is a song about the power of choosing to find a silver lining. “The Pen” is about the dissolution of a relationship, taking responsibility for ones actions, and deciding to grow from the experience rather than think the world is ending. Its the epitome of one mans ending is another mans beginning. “The Darkest Part” is similar in nature, its about not wanting to be with someone if they can’t endure the darker parts of Stapleton. This honesty permeates most of the tracks on Sea Change, Stapleton balances this honesty with positive outlooks. The lack of embittered lyrics is what makes this a feel-good album. Although this album is full of truthful emotions and experiences that often go untouched, Stapleton bridges that gap with his wisdom.

The other theme that is supported by Stapleton’s effortless honesty, is his comments on America’s divisive political state. Songs like “Western Son,” “Kabul’s Fallen,” and “Sea Change tackle those subjects head on. The strife and changes that we have gone through as a nation have impacted our personal lives, which is where Stapleton comes in. None of these tracks are inherently political. In every one there is a dual theme of personal woes that make the tracks approachable. Stapleton’s honest artistry allows him to comment on topics like war (“Kabul’s Fallen” ) and the changes the pandemic has brought on (“Sea Change”). Two topics most artists would stay away from but Stapleton dives headfirst into these nearly taboo subjects to explore his thoughts and feelings. This aspect of Sea Change is a staple of Americana.

The production of Sea Change is as clean and clear as it gets. Stapleton’s voice is front and center, while the guitars are crisp and rhythmic. The melodies are catchy and often breezy, making every song go down easy. My only hiccup with this album is that there is only one truly upbeat track, “My First Rodeo. Not.”. Most of Sea Change is made up of ballads that edge into rock ballads. Stapleton’s voice has a soothing effect that makes every ballad feel vulnerable yet warm. “My First Rodeo. Not.” is a more experimental track that depicts a narrative about an unwanted soul coming into town and messing with the locals. The lyrics are sassy, the riff is upbeat, and Stapleton explores where his voice can go. I would love to see what other country-rock songs Stapleton and The Pretty Pirates have up their sleeve. I think Sea Change could’ve done with one or two more energetic tracks to balance out the ballads, but as it is, Sea Change is a great album.

Corey Stapleton and The Pretty Pirates didn’t hold anything back with their debut album. If you’ve been craving refreshing lyrics and catchy melodies, you cannot miss Sea Change. Whether Stapleton is discussing romance, politics, or self-mastery, you feel compelled to really listen to his thoughts and experiences. We could all take a lesson from Stapleton on viewing every hard part of life for the gifts it has given us. This is only the beginning for Corey Stapleton and The Pretty Pirates, check out Sea Change, out now!