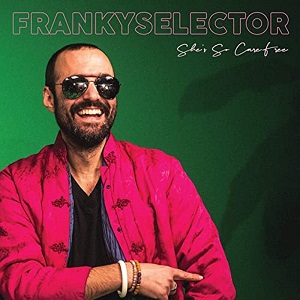 Fans of the North American indie beat have singlehandedly brought funk back as a major aesthetical influence over all contemporary R&B, pop, hip-hop and even rock music in 2020, but for artists like Canada’s FrankySelector, what his peers may or may not be doing with a style he’s essentially mastered in the new single “She’s so Carefree” couldn’t matter less. In his latest release, FrankySelector doesn’t sound like a man who has much of an interest in trying to fit in with the cool kids – he is the cool kid in the Montreal scene, and by letting the beat lead the way through a vibrant mixture of jazz, R&B, funk and soul flavors in this track, he demonstrates a skillset that immediately puts him in an elite category of player.

FrankySelector went with a pretty loose, raw style of mix for “She’s so Carefree,” and I think it works really well for the kind of material he was recording. There’s no space between the instruments; they’re on top of one another rather than evenly layered out, as if to replicate the sound of a band’s clattered attack in the middle of a smoke-filled nightclub someplace.

It’s powerful and overwhelming, yes, but it’s stylized to be a little over the top – while the track, and in an ironic fashion its music video as well, doesn’t shy away from decadence, it isn’t leaving anything unemployed here, either. All of the gluttonous grooving is unforced, which is why it feels both so sinful and so unbelievably right at the same time.

A Floridian voice who wound up in the chilly but always appealing Montreal music scene, I’m very intrigued to hear how FrankySelector continues to develop and expand upon his brand in the months and years that follow “She’s so Carefree” debuting. You can tell that he’s still not quite finishing in his evolution, and there’s definitely going to be a couple of aesthetical growing pains here and there, but if he’s already operating at this level I think he’ll be even better with more time and experience under his belt.