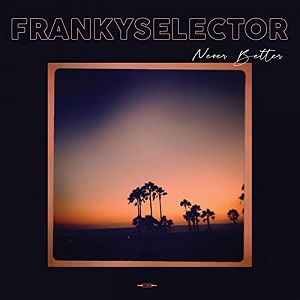 Timed in part to help promote his upcoming Italian tour, FrankySelector’s latest single release “Ice Breaker” will be a certain showstopper during those upcoming shows. It illustrates the impressive global reach FrankySelector’s music already claims despite his short time in the public spotlight. The promo clip released with the song reflects his Florida upbringing, but the music does as well. “Ice Breaker” is a song bubbling with possibilities, its steady onrush from the beginning deviates little during the course of the track but, when it does, FrankySelector hits with maximum effect.

He never overplays his hand. The several synthesizer, keyboard, bass, and other musical adornments expanding on the song’s core sound are never ostentatious but, instead, serve larger purposes. FrankySelector is clearly intent, throughout this song, on creating an all-encompassing experience for listeners and the song clears that hurdle with room to spare. Another aspect setting him apart from other performers is his aptitude for song construction.

It isn’t difficult to notice how vocals are introducing much later than customary during this recording and, even then, the song’s reliance on lyrics is scant. This isn’t a reflection of his feelings about lyrics but, instead, what the song demands. “Ice Breaker” has superb vocal content throughout and the bevy of voices he marshals to make this song a successful light it up with a warm soulful glow.

It has several instrumental highlights. The bass playing is diverse, fluidly moving through an assortment of styles, but always reinforces the accompanying arrangement. There are no arbitrary borders limiting this song. He incorporates eloquent guitar passages into the larger whole, the drums snap with every bit of the conviction you encounter on a quality rock release, and the keyboard/synthesizer contributions are tailored to suit the song’s purposes.

Music such as this will always enjoy an audience. It is art without artifice beyond a few flashes of finesse and those moments fit lockstep into listener’s expectations. Those short yet fiery bursts from different instruments elevate the song’s commercial appeal without ever trivializing it because, there’s no doubt, FrankySelector is interested in writing, recording, and releasing relevant music with lasting value.

His new release is the complete package. It is one song from a longer release entitled Never Better but “Ice Breaker” stands on its own. It bodes well for the quality level of his new release without ever overshadowing it and newcomers will likely end this song clamoring to hear more from this talented young artist.

He is interested in achieving the fame and financial rewards possible for top flight performers but deeper concerns motivate him in a much deeper way. There’s nothing half-assed or soft pedaled about “Ice Breaker” and no reason to expect his creative energies will begin dimming anytime soon. He is alive with the inspiration of a performer approaching his peak and, with any luck, we can expect FrankySelector’s music to remain among us for decades to come. It looks towards a better tomorrow and many of us need that perspective more than ever before.

Share
Previous A.M. SOKOLL
Next Pamela Hopkins “Back When” (SINGLE)