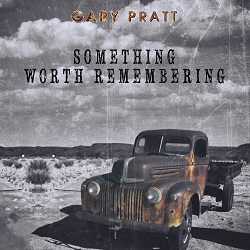 Gary Pratt – “Something Worth Remembering” (LP)

Gary Pratt lets it all hang out and in the process takes his old school sensibilities and turns them into something that feels new and modern with his newest album “Something Worth Remembering”. He’s the kind of guy you wanna sit down and have a beer with after a long day, and not just because one of the songs on this album is called “A Song You Can Drink a Beer To”, he’s got an affable country down-home charm and his music perfectly captures his sensibilities too. Across eleven tracks he takes us through an entire emotional experience mixing humor and light, with murky loss and introspection and hopes all in one record.

Pratt isn’t some novice, by the way, he’s had a long history leading up to this having sung for the CMA Fest and even opening for Dwight Yoakum and Pam Tillis. This is the perfect Country album for long-time fans of the genre but it’s a perfect gateway for those trying to start in a genre that is packed to the gills with acts old and new. Pratt has the gifts of a natural storyteller which is what Country is about first and foremost. It can’t just be a coincidence that the first track on the album is called “You Gotta Jump In” and that almost sounds like a call to arms for the listeners to kick back, grab a drink and relax with Pratt and the experiences he’s had.

‘SWR’ was produced by Bryan Cole and the mixing and mastering is expert quality on this. There’s a crispness to every track that allows you to enjoy every track and bask in every detail from the guitars both acoustic and electric, the keys and the percussion that’s on display are great. There’s a lot of heart in this album too with ballads like “To Find Us” that features Savannah Nider in an especially memorable duet that’s a powerful testament to love and faith and it truly sounds iconic hearing these two performers work in unison. There’s a great flip side on the album that finds the concept of love on less stable ground with the track “When It’s Our Love That’s Lost”, a solo that finds a more vulnerable Pratt forced to confront the uncertainties and sacrifices you have to make to keep going with someone all in the name of maintaining what you have that’s so special to you. It’s not all Love in the romantic sense on this album, there’s plenty of appreciation to go around for family and booze with Whiskey and Beer titled tracks that sound like perfect social gathering kind of music.

There’s something in here for everyone if you’re open-minded enough to try it. It’s an album that doesn’t take itself too seriously, wears its heart on its sleeve, and is the sign of more promising things to come from Pratt as he’ll be collaborating with Nider in the future and that’s going to be literal music to our ears. It’s a fantastic album that’ll surely give Pratt some much-needed attention.