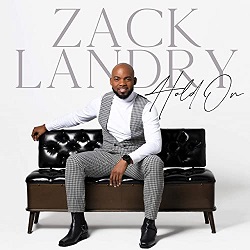 Coming in beaming with optimism and positivity is the triumphant energy by singer/songwriter Zack Landry and his latest single “Hold On”. A 5-minute celebration of faith and empowerment wrapped up in an exciting presentation, this a musical highlight for both those of a specific faith and even those who aren’t as religiously inclined. Stylistically rich, it evokes hits of the 80s of the likes Roger, or Cameo, it hits you immediately with fantastic inviting energy that only ramps up higher and higher as the song progresses.

This is Landry coming in at his most triumphant both vocally and productions-wise. Landry, a natural when it comes to working with keyboards and getting the most out of the many things you can do with it, is an incredibly powerful mood piece as well. This is a song that also holds plenty of resonant emotions from Landry personally as he’s been through a variety of ups and downs in his life including reckoning with the aftermath of hurricane Katrina alongside his family. The belief he puts forth for others to consider is no less tethered to the belief he has within himself and his faith and it’s that kind of well that he draws from that really makes it such a powerful performance. It’s painfully authentic and as the song progresses especially in the back end, his voice is imbued with so much passion, it’s hard to not be immediately won over by him. He’s a true standout.

“Your breakthrough is coming” he belts and it’s a message more people are no doubt in need of and it’s delightful that it comes via such an entertaining venue. The production is slick and crips, but it never devolves into something needlessly flashy. Despite the bombast, Landry displays a great level of self-awareness and control that never makes the song come across as over the top or needlessly grandiose. It’s a power ballad true and true and you can certainly tell that it’s a song that pulls heavily from Landry in a physical way, almost pushing his voice to the breaking point, but he charges through it never losing a step or missing a beat.

The accompanying gospel backing is also in perfect service of Landry, never overpowering but bringing a presence that in a way helps stabilize the song while building on it, and with each echo of a line from Landry, it almost swallows you with how sonically powerful it is. It’s also incredible that for a 5-minute song, it never feels overwrought or too long. The sense of pacing and escalation is methodical and by the time it reaches its climax, you’re almost left in a dizzying state that makes you want to dive back in. Landry represents the new wave of gospel music that is continuing to come to the forefront, redefining it from the preconceived notions of the past but nevertheless maintaining the trappings and soul (no pun intended) that has kept gospel relevant and as powerful as ever.