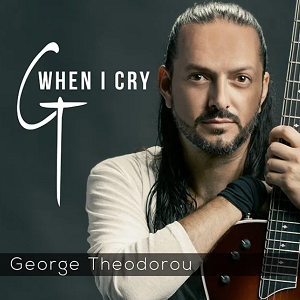 George Theodorou – “When I Cry” (SINGLE)

To say there’s been a lot of interest in classic rock concepts this year might be too great an understatement for a critic like myself; in all reality, the retro-rock trend has been hard to ignore on all fronts, and this is especially the case in indie pop. Singer/songwriters like George Theodorou are drawing inspiration from the past to craft something very special for the present, and in the new single “When I Cry,” it becomes quite difficult even for skeptics to argue with the results these players are getting. Theodorou is among the best I’ve heard lately, and this just so happens to be his official debut.

The passionate vocal this artist puts out not long after we get started in “When I Cry” is enough to steal the show out from under just about any instrumental element, but being that it overtakes the bloated rock n’ roll framework Theodorou is working with in this single, it’s all the more impressive. He’s got a captivating way about him even without these kinds of tests, and in this setting, there’s no mistaking what he’s capable of producing – even when the pressure is as high as it gets.

Most all of the instrumental complexities within this song are overshadowed by the ease of Theodorou’s delivery, which is quite possibly the smoothest you’re going to hear from a greenhorn recording artist in all of 2021. He’s just so natural in his management of the verses here that it’s occasionally hard to keep up with the grinding of the guitar, bass, drums, and piano, all of which are colliding together to make beautiful grooves and harmonies you typically don’t hear very much of in the mainstream half of pop/rock anymore. It’s a talent he was born with, and that’s made clear to us in “When I Cry.”

The growl of the guitars in this single would probably be even more scorching live than it is in this studio version of the song, and though a lot of critics might argue that this is true of most rock n’ roll releases, I think it’s a little different with this specific work. There’s a beastliness in Theodorou’s sound that seems just itching to come undone here, and while he never allows for it to come ripping through the cage, there’s evidence to support the notion that it could do as much in a future composition bearing his name in the byline.

You’re probably going to hear a lot of really great rookies across all of pop music in 2021, but if there’s one rocker you need to be looking in on before the summer season gets into full swing, it is undeniably Mr. George Theodorou. His charisma is of the rarest variety in this genre, as much as it pains for me to admit it as a fan of true blue rock n’ roll music, and perhaps his success outside of his native Greece will have a positive impact on other rock acts trying to get something started in the emerging decade.