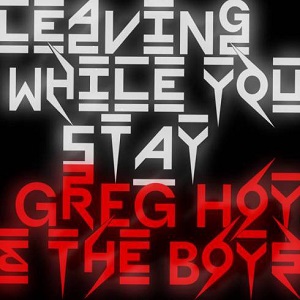 Greg Hoy and the Boys are back with new Single-Video

Calling themselves ‘California Dreamers’, rock outfit Greg Hoy and the Boys bring rock to reality in their new killer hit “Leaving While You Stay” out now via Hoy’s 30 Peak record label. Judging by the audacious guitar wall of sound, this is protest rock at its finest. Gluing together an uproar of drums and heavy bass guitar, this song will grin and bear it.

That title – what does it mean? According to the band’s press release, “Leaving While You Stay” is about “watching and observing people ‘check out’ even as they stay put.” I think we all get to a point of just putting up with something or someone. Judging by the band’s music video, they are making a political statement; in the video a clown-faced President Trump mask is the video’s main protagonist. The lyrics don’t share that same vibe, at least literally.

I think you might be leaving / you know you’ve got that feeling, Hoy sings with slight angst and bravado. While he’s singing, a constant rapid water-level gushing of punk-rockabilly fused guitar magic is slaying. Hoy’s guitar appears to be under the influence of Queens of the Stone Age’s Josh Homme’s guitar in “No One Knows” and carves his way into a new stupid cool atmosphere.

Whadya say? Whadya say? Hoy again sings, hooking the listener for good with his ear candy lyrics. Make way for a lot of reverb and solid pop rock drums about the halfway mark. There’s nothing gentle about this rock song, and even the bass guitar throws its hat in the ring with a bang. Speaking of rings, back to talking about the music video and the circus ring that American politics has become is explored in the song’s visual depiction. Black and white filters, with colorful wavelengths and treatments, “Leaving While You Stay” may have the masked clown as a figurehead, but the music still outshines the plot. As it should. I like a protest song just as much as the rest of you, but at times this song didn’t hit all the criteria for me when it came to political unrest. I get the unrest and anger sentiment from the music bed, but Hoy’s vocals are solidly in one lane: head rocker boulevard.

Hoy, who’s released over 30 albums in his career, channels that badass stature he’s accrued over the years into this track. No embellishments, no extra bells and whistles. This is raw, unhinged, garage rock at an outstanding level. I think I wanted a little bit more out of the lyrics, but the music base is so energetic and almost hypnotic that I can definitely look past any shortcomings. The amount of fuel being pumped out of this band could fill a thousand Hummer tanks – and it’s just the type of song that gets me fired up in the morning. No more standing still and just checking out – Greg Hoy and the Boys’ “Leaving While You Stay” has me amped for the greatness that awaits. Whadya say?