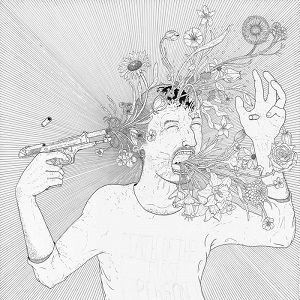 Fading-in from the silence like a thousand screams condensed into a near-whisper like strand of noise, Cinemartyr’s Death of the First Person awakens with “CGI” and only gets more gripping as we press on in its ten-song tracklist. From this initial offering of math rock-style chaos, we enter the clutches of the somewhat melodic punk-metal tune “On Earth As It Is,” this track serving as a skull-cracking segue from our opening cut into “The Brain Of Hideo Kojimaa,” a three and a half minute homage to west coast hardcore redressed as a visceral sludge metal anthem. Cinemartyr are straddling a lot of different grooves here, and though some are more familiar than others are (by leaps and bounds in certain cases), they’re packaged together as to create a multidimensional treat for all the senses to enjoy.

“Stab City” is the most adrenaline-packed number on this album, but it doesn’t feel rushed; actually, I think it’s one of the more deliberate and thought-out recordings here. There’s so much restraint on the part of Cinemartyr as they get into the latter half of this track, and yet their energy is erupting something fierce at the same time, yielding this contrast in the music that is almost impossible to ignore once you’ve picked it up for the first time. The dedicated groove tune “AR-15” is a little more palatable to the casual alternative fan – as opposed to the aficionado-preferred content that comes ahead of it in this record’s natural order – but at this point in Death of the First Person, expecting to hit a mainstream shelf in the songwriting is rather futile to put it mildly.

Cinemartyr turn up the psychedelic chills for a briefly instrumental go-round in “Sleep Is God” that really cements the moodiness that will drive home tracks like the second act’s “Run from Terror to Bring It Closer” before they even begin to play. The band never gets too over the top, even at their most theatrical in tone – “In Filth It Shall Be Found” – and although it’s clear that they spent a lot of time listening to progressive content before drawing up the blueprints for this latest effort, there’s no mistaking Death of the First Person for a concept album. In my personal view, it is simply too punkishly jagged, too excitingly off the cuff, and most of all, too free from the constraints of egocentric composers to qualify.

We come to an end in Death of the First Person with the one-two punch that is the relatively melodic “Keeps Getting Up” and haunting “Tunnel At The End Of The Tunnel,” the latter of which feels like a direct continuation of “Sleep Is God.” When all is said and done, I don’t think it would be too much of a stretch to call this LP a serious AOTY contender among indie rock circles. Splitting at the seams with originality and yet tethered to an iconic blend of influences no college radio buff will overlook, Cinemartyr’s Death of the First Person is required listening in 2020.

User Rating: Be the first one !
Share
Previous Greg Hoy and the Boys are back with new Single-Video
Next Toronto Tabla Ensemble is back with some Unexpected Guests