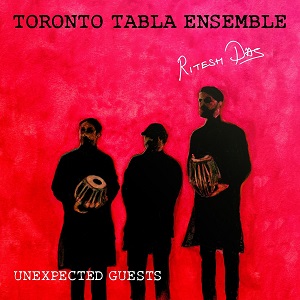 Toronto Tabla Ensemble is back with some Unexpected Guests

Those in need of a change of pace from the pop mundane can’t go wrong with Toronto Tabla Ensemble’s Unexpected Guests this summer, and not only because of the record’s uniquely multidimensional take on out of this world grooving. In songs like the record’s title track, there’s a connection between the musicians – and, to some extent, the dancers in the companion music video – that goes past what I would expect out of a new album from an independent source this season. This group of Canadian collaborators have a bond with the divine source of beats, and they’re making use of it quite well in their latest release.

If you weren’t counting on hearing bagpipes in a single this year, you’d better brace yourself for the incredibly moving strand of melodies that come in the title track of Unexpected Guests. As chill-inducing as any of the beats in “Dream Symposium” or “Maryem’s Here,” the pipes impart a sense of mortality amidst the otherwise vitality-rich environment that the drums are creating. There are two distinct ways to look at this song, but ultimately the conclusion tends to be the same – Toronto Tabla Ensemble will try anything if it makes their music more enrapturing.

There are no synthetic additions to the percussion in “Monkey Tale,” “Toronto Tabla Youth Ensemble,” “What’s Going On?” or “Raghupati;” in all honesty, I don’t think there would have been any space in the master mix for them in the first place. The drums are tight and throttling in these tracks, authentic in tone and, most of all, definitely not the product of some kind of studio software you can pick up at any Best Buy. Musicians are pouring blood and sweat into these beats, and that’s probably why they’re as humanized as they are menacing in certain spots.

The rhythm to “Raghupati,” the album’s closer and my favorite track here, is unorthodoxly surreal, and in contrast to the songs that precede it in Unexpected Guests, it ties itself back into a neat package long before crossing the finish line. It’s perhaps the dreamiest way that they could have brought the record to a close, but what it tells me about this group’s ongoing progressive interest is much more critical. There’s something quite conceptual to this LP, and if expounded upon in greater detail later, it could produce a film or extended concert performance that once would equate to modern pop theatre.

I just got into the music of Toronto Tabla Ensemble, but I’m already very excited at the notion of hearing more of their contemporary work. They’ve got quite the discography to explore, and while their sound is more of the left side of the dial with regards to its experimental design, I don’t think mainstream audiences will have too hard a time getting into Unexpected Guests. It’s a fairly easy LP to play all the way through, and I really don’t recall the last time I could say that about a new pop record.