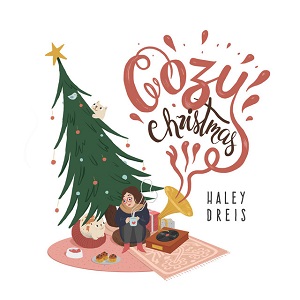 Some of the most iconic songs of our generation are Christmas songs; just ask Mariah Carey, who makes, I’m guessing, 95% of her net worth double every single December as “All I Want For Christmas” controls the airwaves for thirty-one days straight.

There’s something incredibly lucrative about being able to craft a memorable Christmas song, and something even more powerful if you’re able to pull off the formidable Christmas album. The guaranteed annual influx of fans pouring into your discography is probably enough to make any artist salivate, but there are some (indie) artists that simply do Christmas music for the love of the holiday. Phoebe Bridgers has spent the last few Decembers releasing her own covers of lesser-known Christmas songs, and donates the proceeds to various charities, Phoenix appeared on a Bill Murray holiday special with an original song just for kicks, and The Killers have released enough Christmas singles they were able to compile an entire Christmas album out of them.

One such indie artist just doing Christmas music for the heck of it is Haley Dreis, an incredible artist that may have flown under your radar with her 2020 EP, appropriately titled 20/20. She’s back in 2022 with her latest release, Cozy Christmas, which is a fabulous Christmas record with 11 tracks, a mix of covers, and originals. Tackling iconic Christmas favorites such as “White Christmas” and “Silent Night” before shifting into a pop-centric original about the sheer anticipation for Christmas being an incredible feeling in “I Can’t Wait For Christmas,” Dreis has a knack for the holiday and all of its (jingle) bells and whistles. The focus on covers makes sense when you’re such a new artist, but I wouldn’t mind seeing an album full of original Christmas songs in the future — it’s clear that the holiday means a lot to Dreis, and the music she has on Cozy Christmas is impeccable!

The songs all generally fall under the same compositional style, with piano, guitar, and vocals filling the majority of the songs’ instrumentals out, but there are instances of strings (a fantastic solo on “White Christmas”) that stand out among the stripped-down arrangements and balance the well-paced album’s weight with great dynamic shifts; against the well-known structure and lyrics of the album’s covers, the original songs stand out like new gems waiting to be unearthed from a familiar mine cavern path that has been walked a thousand times.

The entire album flows brilliantly from a pre-Christmas buzz to a post-Christmas haze, and the duality of the start and the end of the album is remarkable when looked at as a whole. There’s no surefire way to determine what makes a Christmas song a classic, but delivering a cover of Joni Mitchell’s “River” and then segueing into an original called “Holidays Are Hard” is a one-two punch that hits you where it hurts.

Ending Cozy Christmas with a pensive rendition of “Auld Lang Syne” feels like a great closing note, too, as it opens the album up into the New Year and reminds listeners of the year they’ve had. Christmas is a time for recollection, and it’s clear that Cozy Christmas is an album meant to capture that idea — Haley Dreis is an impeccable singer-songwriter, and this album will hopefully inspire folks to check out the rest of her catalog!